Manny Pacquiao was recently dropped by Nike after his controversial remarks relating gays to animals – and the boxing champ accepted the brand’s decision graciously.

Nike strongly opposes discrimination of any kind and has a long history of supporting and standing up for the rights of the LGBT community.

We no longer have a relationship with Manny Pacquiao.

“Whatever decision Nike makes is its decision and I respect that and its sponsorship of me now only involves my clothes for my fight,” Pacquiao said in response to the contract termination. “Our contract has already ended aside from sponsoring the boxing.”

But while the boxing champ graciously accepted the brand’s dismissal, several of his fans felt that their idol was wronged by the brand.

So, many called for a boycott on the brand, urging other people to stop buying Nike shoes and other products the brand is selling. 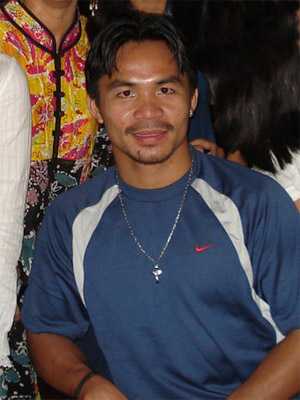 By Mike Gonzalez (TheCoffee) (Own work) [CC BY-SA 3.0 or GFDL], via Wikimedia Commons

They also encouraged Pacquiao to find other brands who are more supportive of Christian views. But there were others who went as far as throwing away their shoes!

Check out this video of several guys releasing their anger at Nike by discarding their shoes in a huge bin:

Still, there were those who were not content with simply throwing away their Nike shoes – after all, such does not have finality because one could always take back the shoes after the video was shot, right?

So, another group of people actually piled up all their Nike shoes and BURNED them! That certainly had ‘more impact’ in that this showed stronger protest compared with simply throwing shoes – but was it really necessary for them to burn their shoes?

We could not help but think about the millions of people out in the world who could not even afford to buy one pair of cheap, non-branded shoes yet here’s a bunch who easily burned their expensive pairs.

To each his own, they say, and it is their shoes anyway but we’re hoping no more of these Nike shoes will be burned in protest and supposed ‘support’ for Pacquiao – especially considering that the boxing champ did not really make a big deal of the brand’s decision!

Check out this video of a group burning their Nike shoes: