A number of brands, notably Nike, dropped Manny Pacquiao in the wake of his controversial comments against the LGBT community. To show their support for their idol, a number of people threw their Nike shoes away, called for others to boycott the brands, and there were even some who burned their Nike shoes!

In all the hoopla surrounding his comments and the avalanche of negative reactions afterwards, Pacquiao remained steadfast on his conviction and did not retract his statement to gain the favor of those he had offended with the statement.

In fact, not only did he not ask people to boycott the brand, he also kept wearing the shoes during training and also while he fought Timothy Bradley Jr. (their third match) in Las Vegas, Nevada! 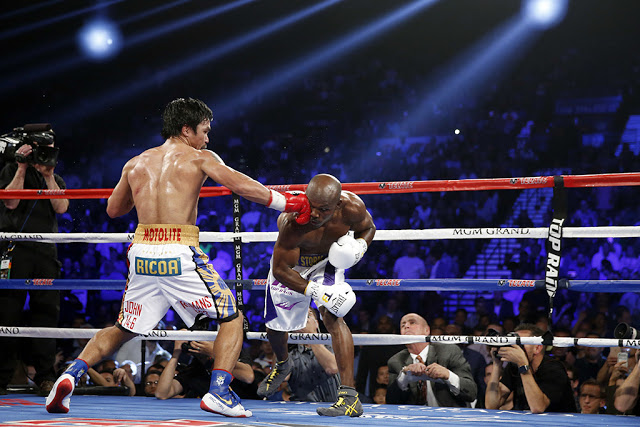 Thousands of netizens are praising Pacquiao for his actions, saying that by wearing Nike shoes during the bout, he showed to everyone that he is not a man to hold grudges against anyone, even against a brand that dropped him like hot potato amid a controversy that did not even directly affect them.

Pacquiao could have easily gotten a thousand (possibly millions) other pairs from other brands – even for free if he accepted an endorsement deal – but he chose to wear Nike mainly because he’s comfortable wearing the brand. Considering how footwork is also quite important in boxing, wearing something he is comfortable with is an essential part of winning.

Congratulations on the win, boxing champ Pacquiao! We are proud of you! We hope that you’ll continue to stay humble and forgiving…

People make mistakes, especially when they are asked about their opinion on a sensitive subject matter, such as about the LGBT community but Pacquiao is said to have been misquoted when he gave out his opinion about the LGBT issue.

On social media and news reports, Pacquiao was believed to have said that he thinks those belonging to the LGBT community are ‘worse than animals’ but though the boxing champ did not recant that phrase, he insisted during later interviews that he meant the bedroom act, not the LGBT people when he made the statement.

Still, the damage has been done. Immediately after the ‘worse than animals’ statement had gone viral, Pacquiao was condemned not just by the LGBT community but by LGBT supporters, the media, and several brands that withdrew their sponsorship so they wouldn’t be associated with his supposed anti-LGBT sentiment.