Netizens have expressed their shock over an English teacher’s wrong corrections to a student’s right answers, making everyone question why in the world she got the job in the first place.

How would you feel if this happened to you?

It’s actually a reality in many schools that they are so short-staffed that many teachers are juggling various subjects, even the ones that aren’t their major subject.

But what happens when a teacher doesn’t actually know anything about the subject? Not only will the students learn the wrong thing, they could fail even if what they knew was actually right! Ouch.

That’s what happened recently in Malaysia after an English teacher made wrong corrections to a student’s right answers.

A photo of a student’s corrected exercise book answers sparked debate on social media over teachers and their teaching qualifications. Many netizens could not believe that this teacher was even teaching English at all because these are basic English exercises.

The student had actually answered all the items correctly, but the teacher marked the answers wrong and made wrong corrections instead. 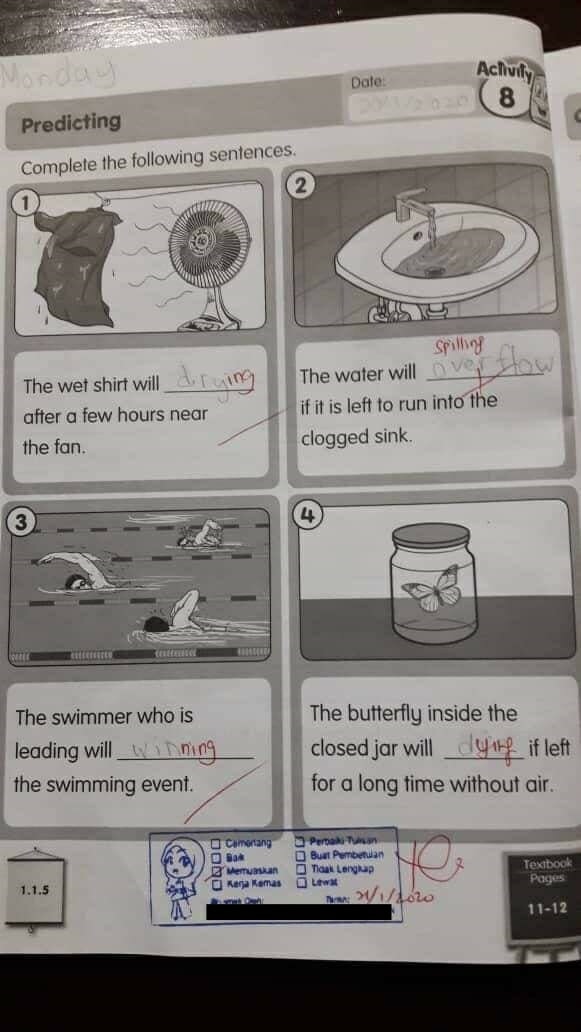 Take this item for example:

“The wet shirt will dry after a few hours near the fan.”

The teacher changed “dry” to “drying.”

The rest of the items were marked in the same way, with the teacher making wrong marks on the student’s correct answers.

It’s unsure whether the teacher was called out and taught right English after this went viral. Many netizens even think that whoever this teacher was, she should be removed from being an English teacher.

Surprisingly, however, there were many netizens who defended the teacher and said that the school was probably understaffed and had to get someone who’s not qualified. But is that really a good excuse?

In most places, teachers need to have a license to teach. Some schools, particularly universities or colleges teaching higher education, require a master’s degree.

But the schools or their heads are usually the ones that assign the teachers to subjects they should teach, supposedly based on their qualifications.