In his Facebook page, Pulong posted a photo of a Temporary Operator’s Permit from the Land Transportation Office (LTO) which indicates his 57kph speed. Apparently, the maximum speed limit in the area he was taking is 40kph. 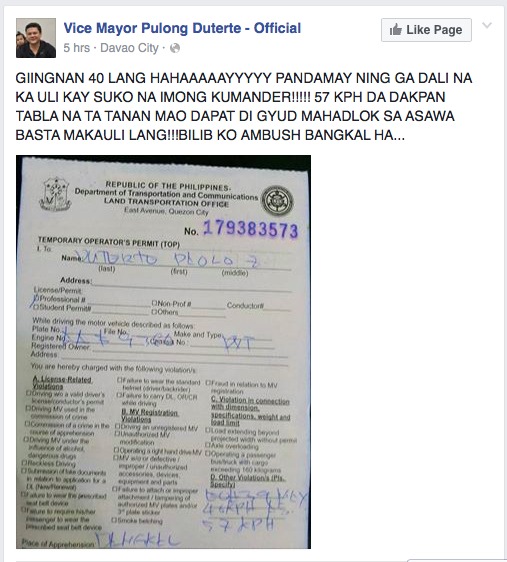 According to Pulong, who was caught overspeeding for the first time, he was rushing to go home as his wife was already angry.

His viral post, which has over 3,000 shares as of this writing, received positive comments from netizens.

A certain Joffer Sumampong commented: “This is the good thing in Davao, law is implemented to anyone, excuses no one.. A good leader is a law abiding citizen.. Change must start from us..Well done Vice.”

In 2014, incoming Mayor Sara Duterte-Carpio, Pulong’s sister, was also apprehended for overspeeding along Quimpo Boulevard. According to reports, Sara promptly paid the fine, allowing her to get her license back.

Davao’s City Information Office said Sara’s apprehension showed that “no one is above the law” in Davao City.

Known for his groundbreaking policies, incoming President Duterte signed Executive Order (EO) 39 in 2013 to put a strict speed limit on highways within the boundaries of Davao City.

The EO, which aims to prevent problems with regards to speeding, states “there is an indispensable need to conduct an experimental traffic scheme aimed at arriving at the most appropriate speed limit which will effectively address the current traffic situation prevailing in the city.”

Those caught violating the law may be subject to fines and arrest as part of the penalty for overspeeding. Their vehicles may also be impounded.