President Rodrigo Duterte will soon make public his new and final list of drug personalities containing at least 1,000 names. The tough-talking President made the announcement on Thursday, September 15 while speaking at a military camp in San Miguel, Bulacan.

Duterte’s Special Assistant Christopher Go handed him the actual list onstage. Although Duterte showed the document to the public, he did not reveal any names on the list. 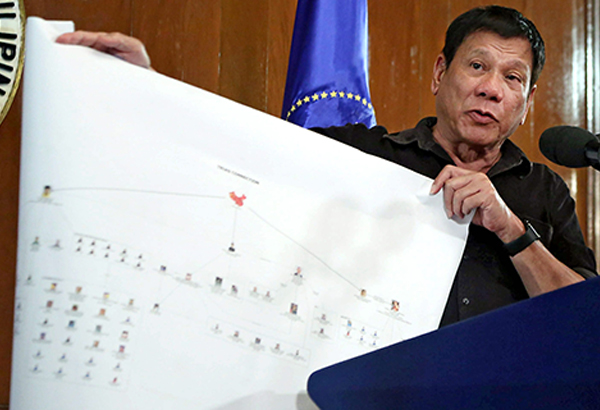 “There are 1,000 – barangay captains, police, mayors, and governors, and judges,” Duterte said.

According to Duterte, the content of the list are based on “raw” intelligence which were fine-tuned by intelligence agencies such as  the Philippine Drug Enforcement Agency (PDEA) and the National Intelligence Coordinating Agency (NICA).

He added that he has discussed the matter with some congressmen in the list earlier.

“Nakiusap ako sa mga congressman kahapon. What will I do with this?” Duterte disclosed.

Duterte’s previous drug list, which contained 158 names of local officials including congressmen, mayors and judges, was released last month. The President maintained that he had revalidated the evidence against the people in the list.

Edgar Matobato, a witness who claims to be a member of the Davao Death Squad (DDS), said on Thursday, September 15, that then Davao City mayor and current President Rodrigo Duterte ordered the supposed ambush of Senator Leila De Lima back in 2009, when she was still serving as the Commission on Humans Rights (CHR) chairperson.

According to Matobato, the DDS was supposed to kill De Lima and her team when they inspected the quarry site owned by ex-policeman Bienvenido Laud in Barangay Ma-a, Davao City in July 2009.  They were searching the area for the supposed mass graves of DDS victims.

However, Matobato said the attempt was unsuccessful since De Lima and her team didn’t reach the area were the hitmen were waiting.