MANILA, Philippines-During a press conference on Monday, May 16 in Davao City, president-elect Rodrigo Duterte announced that curfew for minors will be mandatory nationwide in order to “protect the children”.

According to the outspoken mayor of Davao City, parents of minors breaking curfew will be held directly accountable for the actions of their children and be arrested for charge of “abandonment of minors, putting the life of minors in jeopardy.” Under Philippine laws, minors cannot be arrested. 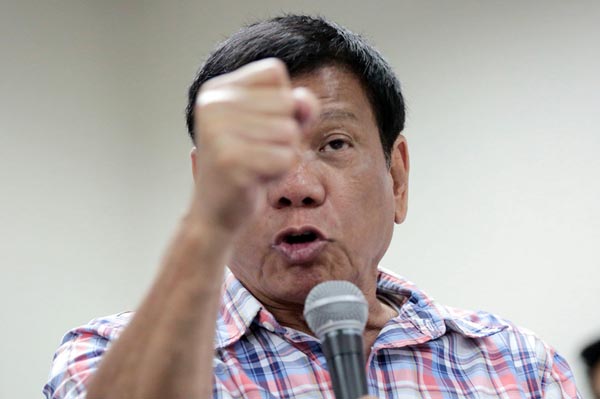 “The police should not arrest minors. They do not have the discernment of what they are doing out there,” Duterte said.

Earlier, Duterte told reporters he would implement a 10 pm curfew in the country. As a 7-term mayor of Davao City, Duterte upheld an ordinance prohibiting those who are 18 years old and below from loitering in the streets between 10 pm to 5 am unaccompanied by their parents or a guardian of legal age.

Duterte added that a village chair will be responsible for coordinating with the police in arresting the parents. Those who will fail to do their duties may face charges of neglect of duties or suspension.

“I’m sure I can hold you or detain you for so many hours,” Duterte said as a warning to parents.

Aside from curfew for minors, Duterte also intends to impose a liquor and late-night karaoke ban.

He said that he would be implementing a liquor ban in public places.

Initially, the liquor ban, which became an ordinance in Davao City, was rejected by businessmen who own drinking establishments. These days, the liquor ban has been accepted in the city.

Duterte has not made a categorical stand when it comes to ban on late-night karaoke sessions. However, pointed out that local officials such as a barangay captain, police, mayor or governor can stop it immediately as it disturbs the neighborhood.