Patients across the Philippines have long suffered problems in hospitals across the country as services are often rendered only after they pay the required downpayment – leading to serious complications and even death to patients who do not have the money to immediately pay for the required payment upon arrival at the hospital.

Thanks to President Rodrigo Duterte, however, this system is slowly changing!

A hospital in Cebu City, Central Philippines has started the roll balling, releasing a memo that all patients will be cared for by the Emergency Department without them needing to pay the required downpayment.

Vicente Sotto Memorial Medical Center (formerly Southern Islands Medical Center) released the said memo whose subject was, “Duterte Health Agenda – Emergency Department Services”. Reforms in the hospital’s services were made “in connection to the health thrust of the present government of President Duterte to provide access to basic services especially to indigent patients at the Emergency Department.”

According to the memo, services covered at the Emergency Department will include not just procedures but laboratories (diagnostic tests) and medicines. Once the patient is admitted, these will be “Charged to Bill”, of course – however, this is already a huge step in the emergency services field as patients will now be cared for, regardless if they can pay the downpayment or not.

After all, it would surely be easier to find money than to replace the life that was lost just because the patient and his/her family could not pay the required downpayment at the hospital! 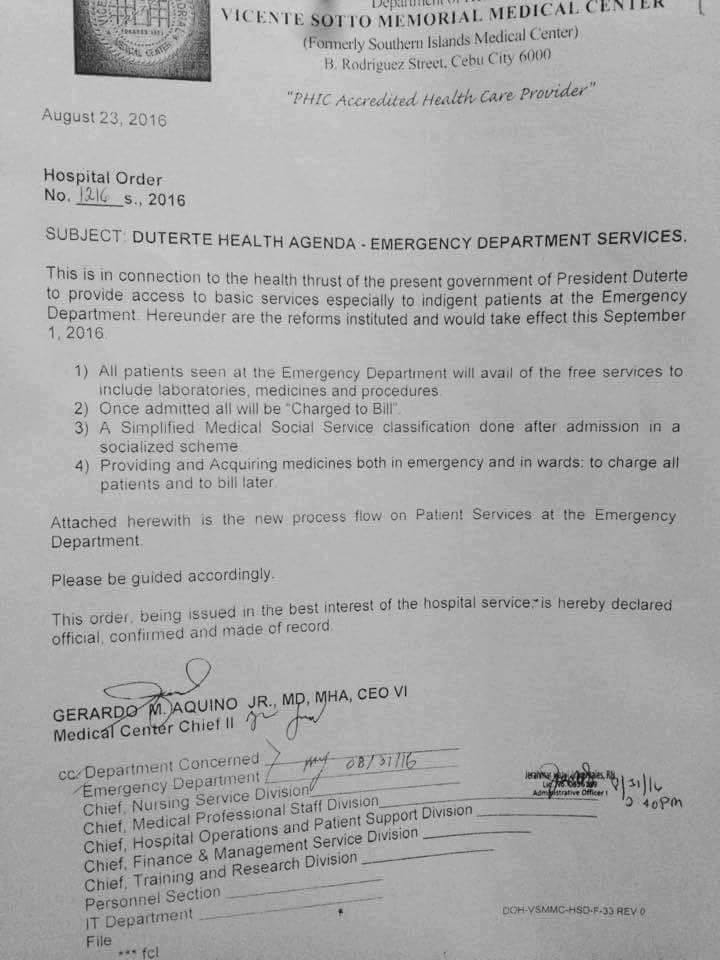 Aside from the changes in the emergency services system, the hospital will now also provide the patients with medicines in the wards and bill them later, so they won’t have to find the medicines outside the hospital or delay getting the medicines because they had no money yet for that day.

Kudos, Vicente Sotto Memorial Medical Center for this – more lives will surely be saved, thanks to the hospital’s new policy. Thanks also to Pres. Duterte for his health initiative which made this possible. We could only hope all hospitals in the country will follow this soon…