Everyone knows that dolphins are playful creatures but one dolphin was too playful with a female in a snorkeling group – and even tried to mate with her, much to her horror!

In a video that has gone viral on YouTube, some snorkelers were swimming with a dolphin in the Turks & Caicos Islands. According to the video description, the girl in the video was with her boyfriend (who is now her husband) and a diving/adventure group who decided to go to the uninhabited island of East Caicos called Joe Grant’s Cay.

While having fun at the waters near the island, a young bottle-nose dolphin joined the group in the shallows. It was all fun at first as the young dolphin stayed with the group for over an hour, swimming and simply having a good time with this curious marine creature.

But things would soon took the turn for worse (or hilarity, as the others view it) when the juvenile dolphin began to take interest in one of the young ladies in the group. It began to nudge her private parts with its snout, seemingly understanding how the human reproductive anatomy works. 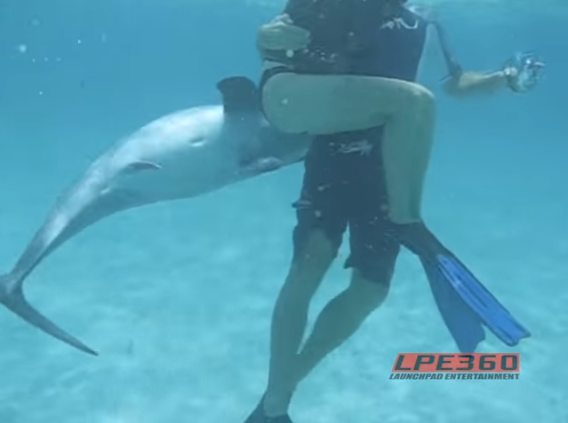 Sporting a massive boner, the dolphin circled the woman as it tried to mate with her. The other divers could be seen laughing at the hilarious scene but the horrified woman was rescued by her boyfriend.

While the woman’s boyfriend tried to separate the two, the dolphin continued to actively try to mate with her. Thankfully, the couple was able to exit waters but the young Casanova reportedly stayed around until the group left.