While we have heard a lot of stories of dogs being rescued by humans, there are also a number of stories about dogs being the ones rescuing humans – be it from other animals, from attackers, or even from strange circumstances.

In Argentina, the story of a stray dog named Way has made waves on the internet after she saved a human baby from freezing in the cold.

According to reports, the child’s 33-year-old mother had apparently abandoned to baby to die at an alleyway one freezing night. Since it was already late and no one else passed the alleyway that night, the child could have died in the freezing cold but thanks to a stray dog, the 1-month-old baby lived. 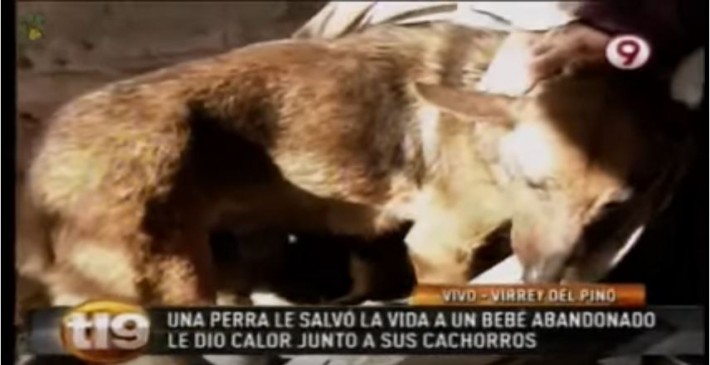 A mom herself and possibly having her maternal instincts kicking in, Way heard the baby’s cries in the night and found it in the dark. Despite living in the streets herself and being really ‘just a dog’, Way took the baby in and provided it warmth.

The baby snuggled with the puppies and instinctively hugged Way. It was in that way that they were found by Alejandra Griffa, a resident at a nearby house who heard the baby’s cries the following morning.

Upon seeing the poor child snuggling with the dogs, Griffa immediately called the authorities and the child was rushed to the hospital. While the baby was suffering from hypothermia and dehydration, the hospital staff strongly believed that the dog was able to keep her alive. Had she not been taken in by the dog family, there was a strong chance she had not made it to morning.

After a thorough investigation, the cops found the baby’s mother. She has been detained and charged for abandoning her baby and leaving it to die in the cold…