Knowing full well that she would be punished for eating her abusive owner’s lunch, a dog named Si Mao from Central China decided to run away and seek refuge with a neighbor. But would you believe this neighbor is actually a lioness living inside a zoo?

It seems that Si Mao has formed a special bond with a 4-year-old lioness named Zhen Zhen who, for some reason, actually became her staunch protector. Not only did Zhen Zhen allow Si Mao to live inside her cage, she did not treat her as prey. In fact, the lioness would share her food with the dog! 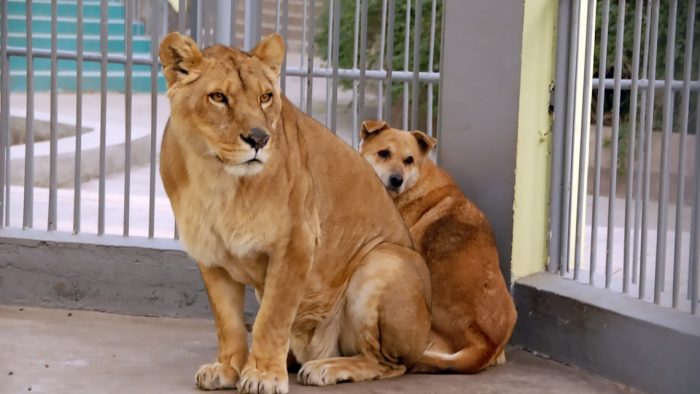 Photo credit: Ripley’s Believe it or Not!

Workers at Wuhan Zoo are not planning to remove Si Mao from Zhen Zhen’s pen – and this may well be something they should do so that Si Mao’s owner could not abuse her again. Also, Zhen Zhen appears to treat Si Mao as her friend; so the dog is in no immediate danger of being turned into a meal by the apex predator.

It is even possible that Si Mao is in a safer, better place with Zhen Zhen as she gets free food and free protection from the big cat – as opposed to the evil treatment she is receiving from her human owner!

There are plenty of animals that are predators, whether they are large or small, as a “predator” is defined as “an animal that naturally preys on others”. However, apex predators are those that are located on top of the food chain – this means they have no predators.

For example, a raccoon is a predator, hunting amphibians and fish (possibly birds and mammals if food is scarce) but it also has plenty of predators such as the eagle owls, wolves, and lynxes. Thus, a raccoon is not an apex predator.

But the raccoon’s predators (wolves and lynxes) could be considered as apex predators since these do not have predators (unless you count humans who hunt them for sport).