A 26-year-old PhD student from Indiana discovered her “evil twin sister” after doctors performed a surgery on her brain.

Complete with hair, bone, and teeth, the tumour dubbed as her “embryonic twin” was found inside Yamini Karanam’s brain. 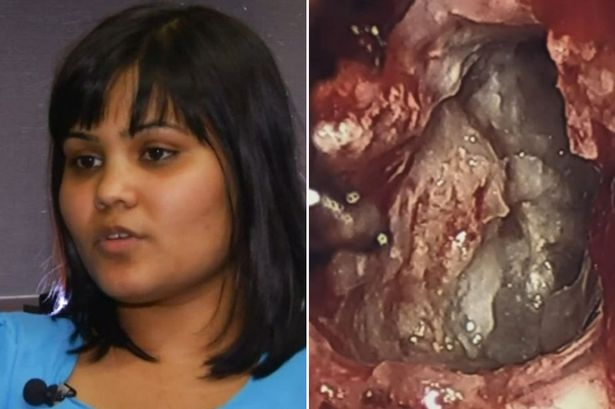 After having difficulties reading and having a conversation, Karanam sought the help of surgeons who suspected she had a tumour in the brain.

“If a couple of people were talking in the room, I wouldn’t understand what was happening,” Karanam revealed.

Medically known as teratoma, it is a tumor containing tissue or organ components. Some reports claimed that teratoma contains hair, teeth, and bone. In rare cases, they contain more complex organs such as hands, feet, torso, limbs, or eyes.

Karanam considers teratoma as  her “evil twin sister who’s been torturing her for the past 26 years”.

Believed to be congenital, small teratomas are usually detected much later in life as in the case of Karanam.

Dr. Hrayr Shahinian, one of the surgeons who performed the operation at the Skullbase Institute in Los Angeles, revealed that it was only the second teratoma case he has handled in his practice. Dr. Shahinian has extracted about 8,000 brain tumours.

How are teratomas formed?

According to Dr. Cathy Burnweit of Nicklaus Children’s Hospital in Miami, a teratoma is formed when an individual’s germ cells multiply abnormally and differentiate into several different tissues in abnormal places. In the case of Karanam, her teratoma formed inside her brain.

However, Dr. Burnweit said that the teratoma can’t be considered a twin.

“It has many of the components that a normal body would have, but it is in no way a twin,” she emphasized.