In the village of Sebekapur in the Gajapati region of Odisha, east India, a male Doberman died after hours of fighting with four venomous mountain cobras who tried to enter his owners’ house. Dibakar Raita, the dog’s owner, revealed that he only bought the dog a few months ago.

Living on the foothills, surrounded with plenty of shrubbery, the residents of Sebekapur often encounter various wildlife but this was the first time that a dog sacrificed himself for his owners.

According to reports, the mountain snakes tried to sneak in the house but the dog, who was guarding the house, fought them off. Plenty of blood could be seen on the porch, showing just how much the dog had fought hard to ensure his owners are safe.

For hours, the dog battled with the snakes but although it managed to kill all four mountain cobras, he also died minutes later due to the deadly effect of their venom. 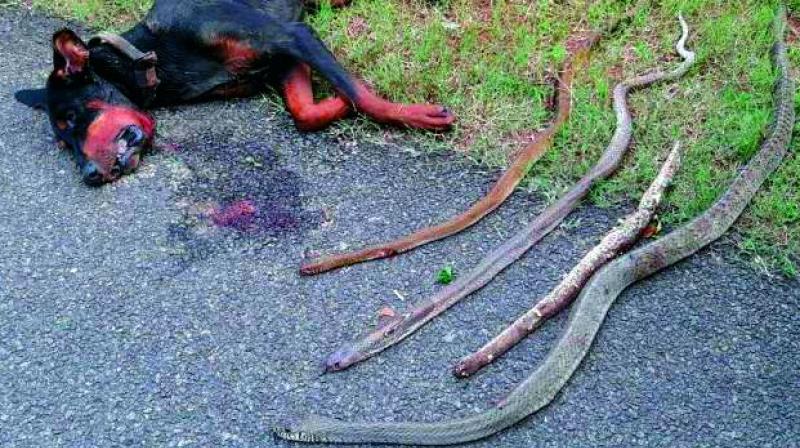 “I’m shocked. He has made the supreme sacrifice for me and my family. I will remember him till our death. I pray God – May his soul rest in peace,” lamented an emotional Dibakar.

To show their eternal gratitude for the dog, Dibakar organized a funeral which was attended by hundreds of villagers who were also amazed at the dog’s heroic deeds.

Thanks to the dog, all 8 members of Dibakar live; though it was sad that he had to give up his own life for the humans to live…

What is a Cobra?

A cobra is a highly venomous snake often found in Asia and Africa. Although it looks much like other snakes when at rest, the skin of its neck transforms into a hood when it is angry or disturbed.