Home
Lifestyle
Health
#DepressionKills: A Call To Everyone, Don’t Let Depression Take Your Loved Ones Away, Don’t Let It Be Too Late

Depression is a word that we always hear. Some throw the word around carelessly thinking that it’s not a serious issue.

But in reality, depression is serious. In other words, it can kill. There are various stages of depression, some severe cases have intense symptoms such as significant appetite, or weight loss, sleep problems, and frequent thoughts of suicide.

These thoughts of suicide, if not prevented may lead to the actual suicide. They say that those who commit suicide experience a feeling of regret at the last moment before they succumb, but often times it proves to be too late.

Such is a saddening case that flooded people’s newsfeed this morning in February. A talented 19-year-old took her own life because of her depression. 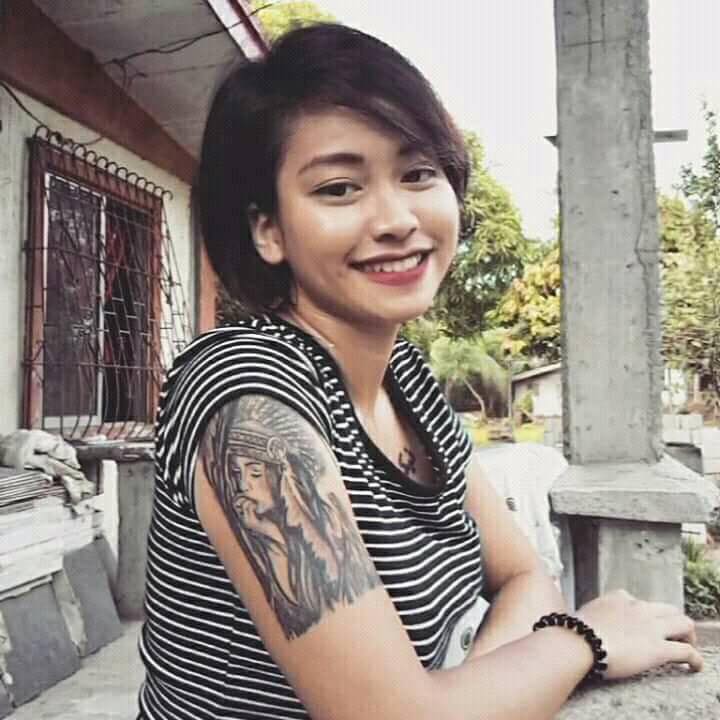 Aubrey So is a talented artist that sadly succumbed to depression. Since the early part of January, she has been posting and sharing thoughts of depression on her timeline.

She also posted an artwork showing somebody who committed suicide, it was “liked” by a lot of people and she even thanked them for that. 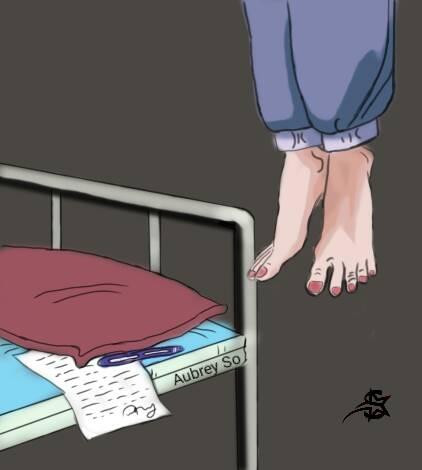 At this point, we are not sure if any of her friends who saw her series of posts took time to actually approach her or not. But clearly, the frequency of her posts are her cry for help.

Signals and cry for help

She did have friends. No matter how alone she might have felt, she had friends. One of her friends took to Facebook about how devastated she was when Aubrey decided to take her life.

According to her, she already got worried when Aubrey said she will take her own life but was relieved to see her go online at around 5 am.

Sadly, that 5 am chat proved to be their last chat as Aubrey even showed her friend the rope that she used.

Regine Darantinao Tanala posted how she was devastated when she learned that Aubrey was really serious. 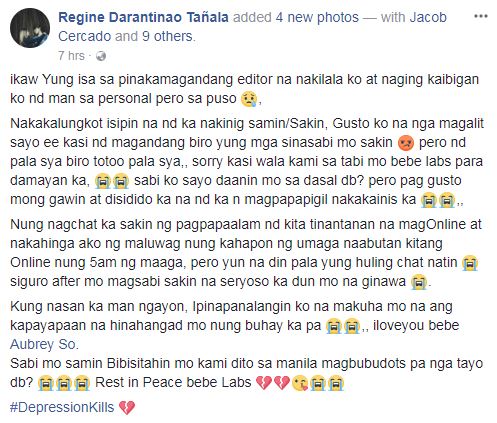 She showed the 5 am chat, she posted screenshots of the conversation she and Aubrey had. There, Aubrey asked her to send her thanks to their groupmates. She said she intentionally waited for that time of day so people will still be sleeping. 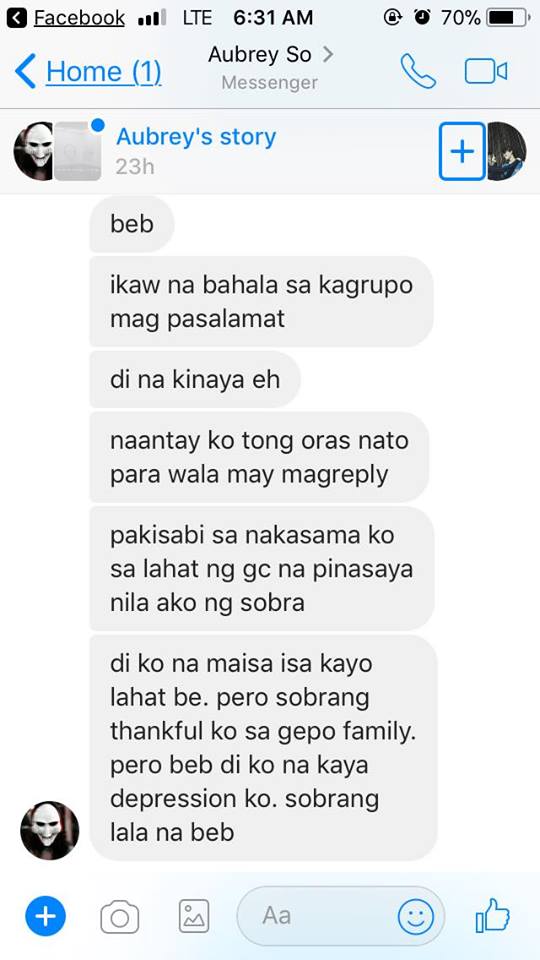 Fortunately, Regine was awake and she asked what happened. But Aubrey said that she was supposed to take her life yesterday but she fell asleep so she was doing it now. 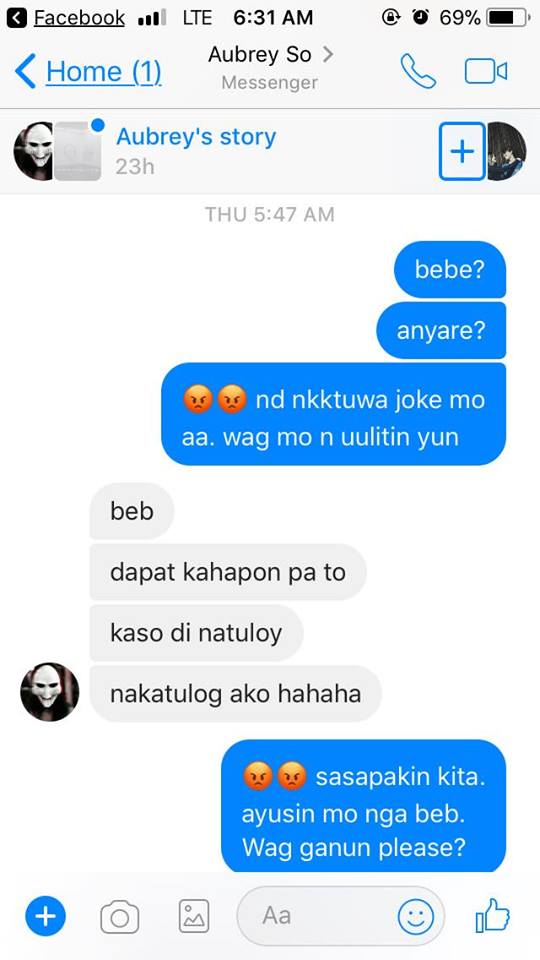 Regine was startled and even pleaded for Aubrey to stop what she was doing and to not turn it into a joke. 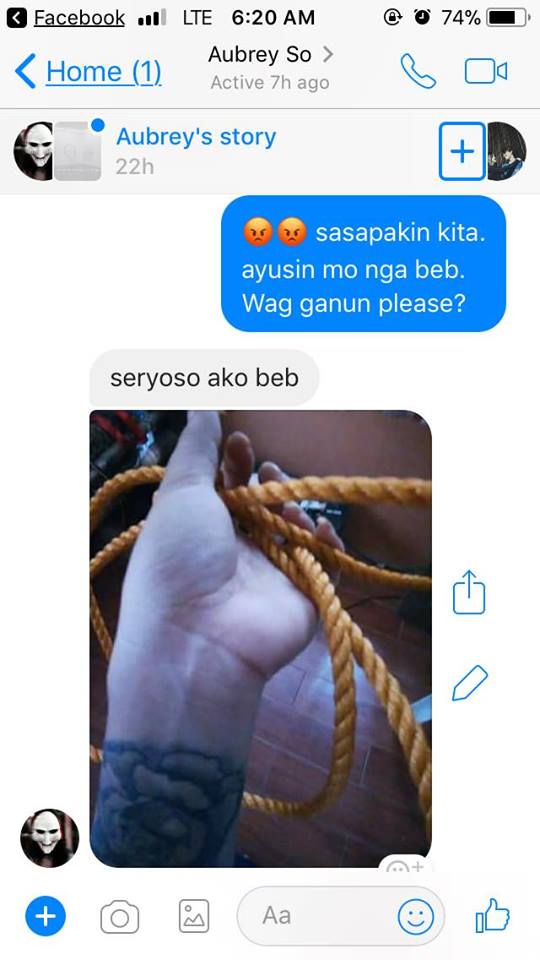 Unfortunately so, Aubrey just sent a photo of the rope and said that she was serious.

True enough, that was the last message Regine got before the news came to her.

You are not alone

Here in Rachfeed, we recognize that depression is a serious matter. To those who feel depressed, please know that you are not alone. You have friends and family around you that care for you.

Also know that when a depressed person kills himself, she is not the only who dies. The people around them who love them also feel that void of having them taken out of their lives without having the chance to help.

Depression is serious, but it can be beaten

To everyone, let this unfortunate thing that happened to Aubrey be our eyeopener. Instead of patronizing TV shows and Facebook pages that promote depression and negative thoughts, let’s just focus on giving support.

These pages and show can choose to show support, but showing depressing and negative posts only allow the people seeing it sink lower into depression’s hold.

Majority of the people who are depressed said that they were getting comfort on these kinds of show and pages. They said that the posts make them feel that they are not alone.

But in reality, some of these are just feeding off of their emotions.

So this is a call to everyone who is reading this. If you have someone close to you showing signs and cries for help, are you going to let them seek comfort from these shows and pages?

Let’s all be one in giving support. Let’s let our friends who are suffering know that they are not alone. We are here for them and let us make a way to make them feel that.