Mermaids, having been the subject of several fictional novels, films, art and folklores of many cultures around the world, have long captured the imagination of humans for ages. No one knows for sure if these mythical aquatic creatures really do exist but many are convinced that mermaids are more than legends following several claims of “real” mermaid sightings.

Gruesome images of a rotting body of what is believed to be of a mermaid washed up on a beach in Great Yarmouth in Britain have puzzled netizens after a certain Paul Jones shared it on his Facebook page. 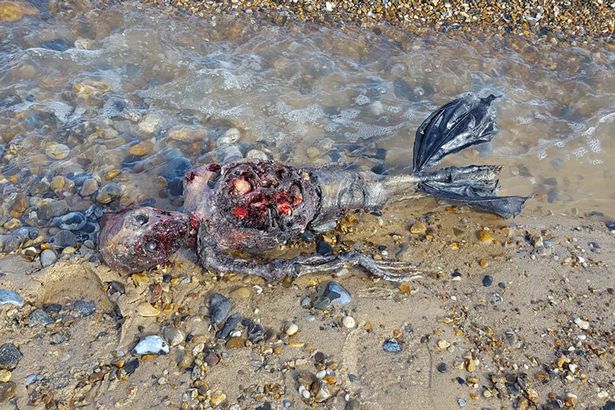 The rotting body of the human-like creature with a fish tail was found lying on the sand of the beach. While the tail and head of the creature remained relatively intact, its midsection appeared to be decaying.

“Today at Great Yarmouth we found what looks like a dead Mermaid washed up on the beach,” Jones wrote on the caption of the picture.

While some conspiracy theorists who saw the photo believe that it is indeed an image of a real mermaid, others are convinced that it is the body of a dead seal considering that the East Cost has a large colony of grey seals.

According to a report by Mirror UK,  Jones’ Facebook page shows that he is a modeller of creepy figures and is a member of the “Horror and Halloween DIY” Facebook group.

According to the National Oceanic and Atmospheric Administration (NOAA), there is no evidence that these aquatic humanoids have ever been found.

“No evidence of aquatic humanoids has ever been found. Why, then, do they occupy the collective unconscious of nearly all seafaring peoples? That’s a question best left to historians, philosophers, and anthropologists,” NOAA said in its website.