“I can only characterize such a situation as martial law without the formal declaration,” De Lima said about Duterte’s anti-drug campaign. 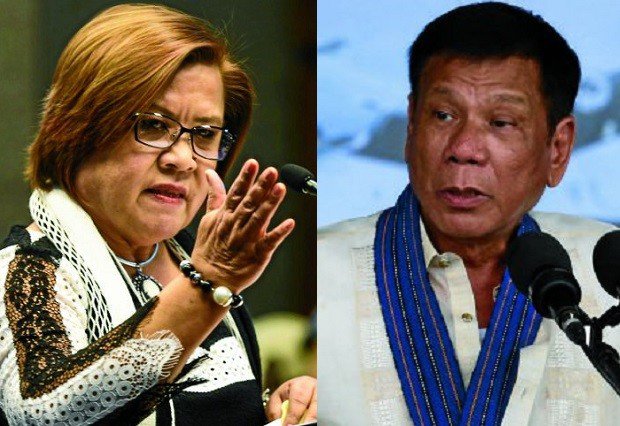 The lady Senator who is leading a Senate investigation on the spate of extra-judicial killings, said the Philippine National Police (PNP) is conducting door-to-door campaign at gated communities without search warrant.

Pointing out that the Philippines is now under international surveillance due to Duterte’s anti-drug campaign as well as the spate of killings supposedly being linked to it, De Lima said we shouldn’t set aside the rise in death toll in exchange for safety against drugs.

Furthermore, De Lima denounced Duterte’s decision to give late strongman Ferdinand Marcos a hero’s burial. She said allowing Marcos to be buried at the Libingan ng mga Bayani is meant to condition the minds of people to forget the atrocities of Martial Law and make way for a new dictatorship.

Early this week, De Lima filed a petition against the planned hero’s burial of the former president before the Supreme Court.

During his campaign, Duterte said he would not become a dictator since it will dishonor his late mother, who was a member of the Anti-Marcos movement in Davao City.

What is a dictator?

A dictator, like the term “tyrant”, is a leader who wields absolute authority. It is generally used to describe a ruler who holds and/or abuses an extraordinary amount of personal power particularly to make laws without effective restraint by a legislative council.