Halloween is fast approaching – and kids in many places around the world are excited to plan for their costumes. While most boys his age are working on their superhero outfits for Ironman, Captain America, Wolverine, Thor, or some other big hero guy, Caiden Henson declared that he wanted to go as Queen Elsa this year – and his dad should dress up as Princess Anna, the Frozen queen’s sister.

Most dads would get angry at such a choice and try to convince (some would even force) their son to change his mind yet Caiden’s dad is of a different breed. Instead of suppressing his child’s creativity and insisting he go as a male character, superhero or not, 28-year-old Paul Henson decided to support Caiden all the way; just as he always had in many of the boy’s previous ideas.

Father and son went shopping for the best Queen Elsa outfit they could find. When they finally found the best one that suited Caiden, Daddy Paul snapped a shot inside the dressing room and posted in on Facebook with the following caption:

Anyone that knows us, knows we generally let Caiden make his own choices, to an extent. Well, he has decided on a Halloween costume. He wants to be Elsa. He also wants me to be Anna. Game on. 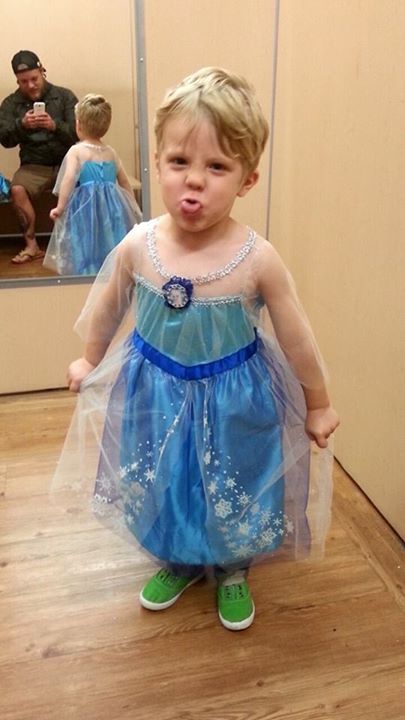 As expected, the photo swiftly went viral – but surprisingly with mostly positive remarks from netizens!

Instead of being bashed for supporting his son’s “girly” choice, Paul was praised by many for his parenting method of raising his child to be himself and fully accepting him for who he is – whether he likes to be a male superhero or a female character.

Fictional Disney character Queen Elsa ruled the make-believe kingdom of Arendelle using the magical ability to create and control ice. Before learning that she could control her powers using love, she accidentally sent the entire kingdom to an eternal winter during her coronation night as queen.

Thankfully, her sister Anna tried her best to change the cold-hearted Elsa and bring back the regular seasons to Arendelle.