One dad cycled over 1,400 miles in 21 days just to meet one of the recipients of his late daughter’s organs – and it was but perfect that this guy had received her heart…

According to the post on LAD Bible, Bill’s 20-year-old daughter Abbey died in an accident last January. Her parents decided to donate her organs not just to help those who are in need of these organs but also because they wanted Abbey to be ‘alive’ in these recipients.

Still grieving, Father’s Day this year was truly heartbreaking for Bill but he decided to do something about it and celebrate the annual occasion as well as Abbey’s life. Through the organization that facilitated the organ donation, Bill tried to contact the other recipients so he could meet them in person and experience seeing part of his daughter, even for one last time. 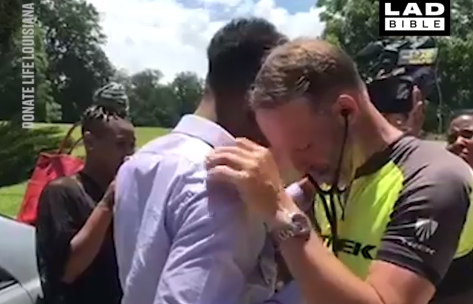 Of the four people whose lives were saved by Abbey’s organs, only one responded: Lounmonth Jack, Jr. What’s quite sweet is that Jack received Abbey’s heart.

Bill quickly went on a 1,400-mile journey, traveling around 65 miles a day just to reach Jack in time for Father’s Day.

Their meeting was a rather emotional one. Bill was able to hear his daughter’s heart beating inside Jack’s chest – and he broke down, crying. The two men hugged each other, sharing a sweet moment that had spectators crying as well.

The bittersweet moment was captured on camera and shared on social media where it gained millions of views and thousands of comments. Most netizens who watched the video were touched by the moment; although many couldn’t help but feel disappointed that only one of the four recipients met with Abbey’s dad.