The crowd cheered for a disabled dad as he proudly escorted his daughter while using his hands to walk.

At 79 years old, Alexandre José da Silva still feels rather healthy and well; although he has long resorted to using his hands and arms in walking because he lost use of his legs back when he was 15 years old due to an undiagnosed spinal condition.

Alexandre had eleven children with his now 68-year-old wife Maria but only three of these children survived. One of these is Rosany Caetano, the one he escorted at her graduation from Piaui State University in north east Brazil.

Rosany finished with a degree in law and plans to pursue her dream of becoming a lawyer while also saving money to buy her father an electric wheelchair so he would no longer have to resort to using his hands to walk. 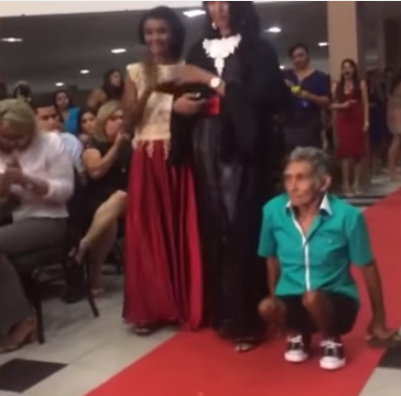 In a video that has gone viral on social media, the crowd could be heard cheering as Rosany walked together with her parents. Clad in a toga, Rosany held her mother Maria’s hand while dad Alexandre tried to keep at pace with the pair by using his hands, aided only by a small stick and a block of wood.

But the people who saw the trio walking on the red carpet in the school were quite amazed at this proud father and his happy family. While some students would have been embarrassed to have their father seen in this manner, Rosany was proud of her father.

Alexandre was quite surprised at the attention he’s getting from the crowd and later on social media, saying he’s been walking this way for most of his life that he feels it was just an ordinary thing for him to do.

Still, people greatly admired him for supporting his daughter and sending her to school despite his condition.

Rosany is actually the first in their family to get a degree.

“I had to live away from home and work part-time doing all sorts of jobs from cleaning to waitressing to support myself through the course. My parents helped where they could but what they lacked in money they more than made up with love, encouragement and the amazing example of how they’ve led their lives,” the graduate happily narrated.