A guy named Philip was buying megabox/durabox at Ace Hardware in SM Baguio in Baguio City, Philippines when they discovered an inadvertent condom joke at the counter where they were paying for their goods.

According to Philip, they were lining up at the cashier to pay for the boxes but the one they were originally queuing up in was quite slow; thus, his girlfriend looked for another counter. She found one that had a fast cashier; thus, they moved there.

While Philip was arranging his goods on the counter, he was quite surprised when his girlfriend roared with laughter for no apparent reason. She was laughing so hard that Philip and the cashier were quite shocked, especially because they had no idea why she was roaring with laughter.

It took a while for Philip’s girlfriend to tell him the source of her amusement because she could hardly talk at all as she was still laughing controllably. When she was finally able to point out to Philip the reason for her mirth, he began laughing hard, too. 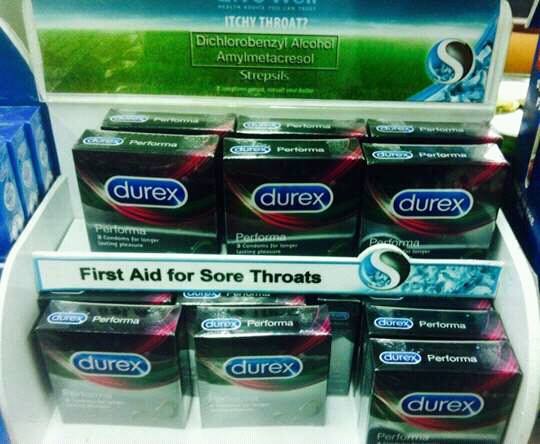 “Baby! First aid for sore throats oh!” the girl said, still laughing while pointing to a box of Durex condoms which were carefully arranged on a small stand supposedly for Strepsils, the actual “First Aid for Sore Throats”.

The cashier joined their laughter after seeing the hilarious misplaced condoms – or perhaps, those condoms were placed there by a jokester Durex merchandiser who was just waiting for someone to notice the joke? But it would have been more hilarious if that guy didn’t even notice the joke and had only been using the stand because they ran out of Strepsils.

Whatever the reason for the inadvertent condom joke, it really was quite hilarious, wasn’t it?

Philip and his girlfriend thought so, too; thus, they shared the funny story on Facebook page, The Louisian Files, as they believed it would garner at least 1k likes. To date, the post has surpassed that mark, earning over 1.5k likes and still counting…