Have you ever wondered what happens to your food order if the rider meets an accident? Well, that’s not something we want to happen, of course, but in case you were wondering that, the most likely answer there is that you don’t get your food. Period.

But this hypothesis was proven wrong when a Jollibee rider met an accident in Davao City. According to Kristine Faith Ceniza Jov, she ordered food from Jollibee delivery. Some 40 minutes later, there were lots of policemen on their doorstep.

She soon learned that the delivery guy met an accident and, presumably, was brought to the hospital since the cops took the initiative to bring the food to the rider’s client as they thought the customer was probably hungry by then – especially because the incident appears to have happened at around 9:45 PM. 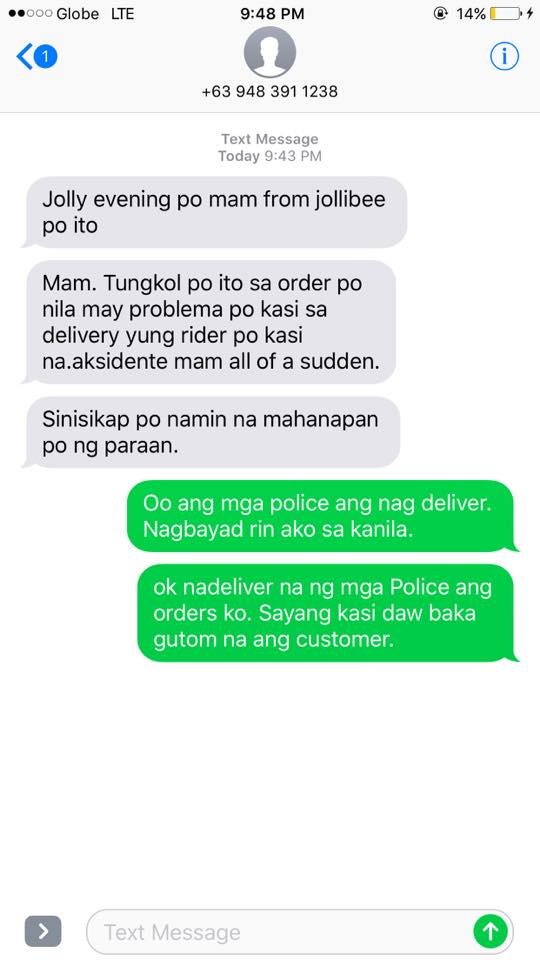 In a post that has since gone viral on social media, Kristine shared a snapshot of her convo with someone from Jollibee who informed her that there was a problem in delivering her order as the rider had met an accident. They promised to find a way to swiftly address the situation.

Kristine replied that the order had been delivered by the cops who told her they thought it better to deliver the food themselves as the customer might already be hungry.

The post went viral as many people were amazed that the cops would actually do something like that even if they didn’t have to do it.

A lot of netizens couldn’t help but comment, however, that Kristine sounded quite rude when she replied to the message as she didn’t even thank the texter from Jollibee for expressing concern over her order and that she didn’t also express sadness over the fate of the rider; she would later reply to some of the comments that she had actually thanked the concerned parties but didn’t post that part of the convo.