Kids love treehouses. This father from Vermont knows he couldn’t build an actual one for his children so he just made them the next big thing – he transformed their bedroom into an indoor treehouse.

The time lapse video below shows us Adam’s superb handyman skills. According to the description, he did the project “as a Christmas present” for his two daughters and it took him 2 to 3 days to complete. He was tight on budget at the time and so he built the treehouse using IKEA Malm Dresser.

“Before I hatched the idea of an Indoor TreeHouse I was faced with the challenge of a very small bedroom. I wanted to create a room that had floor space to play on, clothes storage but also make a space for them to crawl around in under neath as a “Fort” of sorts.”

The footage runs for a little over 10 minutes and it shows how Adam did the whole thing, from cleaning the room and building the frame, to pre-staining the plywood trees and everything else in between. 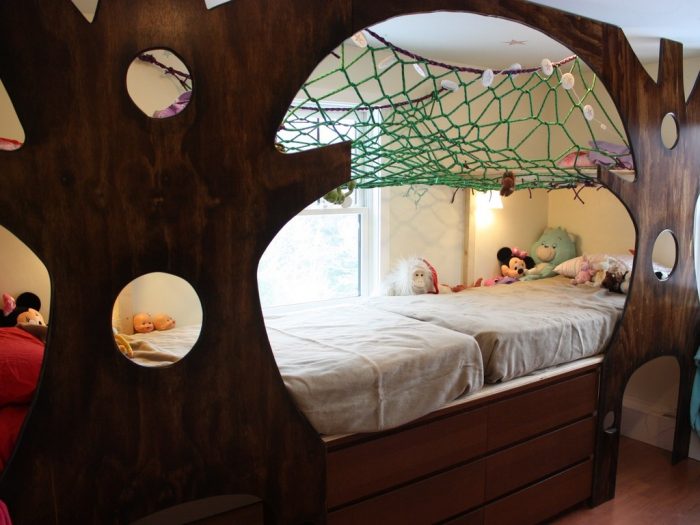 Despite the budget limitations, the outcome was absolutely impressive. The kids love the net hammock and the hidden floor tunnel. When he finally showed them and asked for their reaction, the kids went crazy over it and called it “the best thing ever!”

Adam later uploaded the video on his YouTube channel. He even left a link for those interested to get a copy of the plan.

It’s obvious this dad really loves his daughters. That is , of course, always a good thing. This just goes to prove that sometimes, the best gifts are not exactly those that you can buy from stores.

Go share this cool video with your friends on social media!