In Russia, thieves had just gleefully escaped after robbing a church but they were engaged in a high-speed chase with the police. The police’s dashboard camera captured something crazy, though – something short of a miracle or instant punishment from the heavens.

In the hair-raising footage, the dashboard camera clearly showed that a thunderstorm is dumping heavy rain in the area. The vehicle with the thieves was identified as the one directly in front of the car with the dashboard cam; though it was a few meters away.

During the high-speed chase, the car suddenly burst into flames and was totally damaged, scattering bits and pieces of car parts and human bodies in the busy highway. 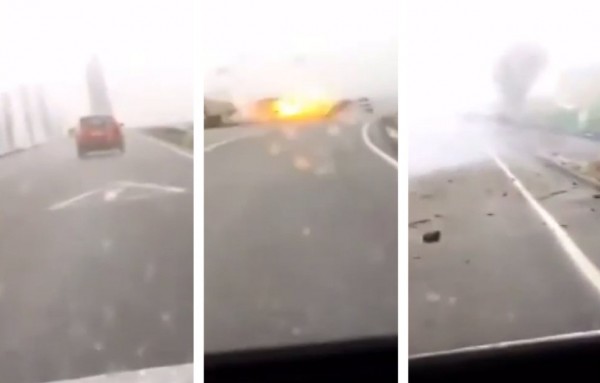 The police vehicle was forced to stop and inspect the damage. No one among the thieves in the getaway car survived. Another vehicle was partially damaged by the debris but its passengers were fine, reports the Daily Mail UK.

There were those who doubted the authenticity of the video and asked how it was possible for lighting to strike the moving car but there were plenty of other instances when lightning struck a vehicle on the ground even without a thunderstorm!

Watch the footage below:

Update : The video has been removed.