The foreign ministry of China has denied allegations that Chinese food companies are shipping marinated human meat in cans to be sold as corned beef in Zambia in Africa.

The rumor, which allegedly started after an unnamed Zambian woman living in China posted photos of supposed human meat in a slaughterhouse, has prompted Chinese Ambassador to Zambia, Yang Youming to issue a statement regarding the controversy. 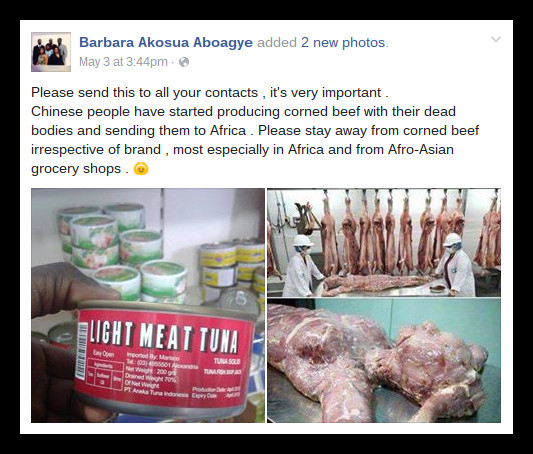 “Today a local tabloid newspaper is openly spreading a rumour, claiming that the Chinese use human meat to make corned beef and sell it to Africa. This is a malicious slandering and vilification which is absolutely unacceptable to us. We hereby express our utmost anger and the strongest condemnation over such an act,” the Chinese ambassador told Xinhua, a news agency in China.

Moreover, Youming said that the reports were meant to destroy the long-standing partnership between the two countries.

The photos which supposedly shows flesh from human bodies were taken from a marketing stunt for the video game Resident Evil 6 back in 2012. In addition, images of fake “human meat” showcased at the  London’s Smithfield Market were also used in the malicious post.

According to Christopher Mulenga, Zambia’s Deputy Defense Minister, the Zambian government will launch an investigation into the reports and provide a comprehensive statement.

“The government of Zambia regrets the incident in view of the warm relations that exist between Zambia and China. We shall make sure that relevant government authorities will take up the investigations and give a comprehensive statement,” Mulenga said in a statement.

China remains a key importer of copper, Zambia’s main export, and has invested a large amount of money into the African country’s mining industry. Furthermore, a large community of Chinese immigrants have established  successful businesses particularly in the retail and construction industries in Zambia.