Home
News
News & Culture
Child of A Dead Soldier Says, “Papa, Papa”; He Taps Coffin Of His Father Thinking It is A Tablet Screen

The conflict in Marawi has taken a lot of lives among our soldiers and the whole country has been grieving over the loss of each one of them who were all considered heroes fighting for peace to reign in the country.

We’ve heard, watched and known a lot of stories of sacrifices, of pain, of brilliance and bravery among them, leading to their deaths, a very heartbreaking scene to witness but a reality for the bereaved families to accept.

I was made to believe that when a soldier decided to enter that career, his family was already prepared to see him at his worst– to see him dead.  But I would always refute that and say, no one would ever wanted to  see a loved-one die.

Sgt. Jobert Cofino, 28 years old was one among them who died in an encounter last June 9, 2017. He was one among the 13 gallant soldiers who fought against the Maute group and unfortunately did not make it alive.  Cofino had left behind his wife and their 11-month-old PJ who at his very young age was not totally aware of what happened to his father. 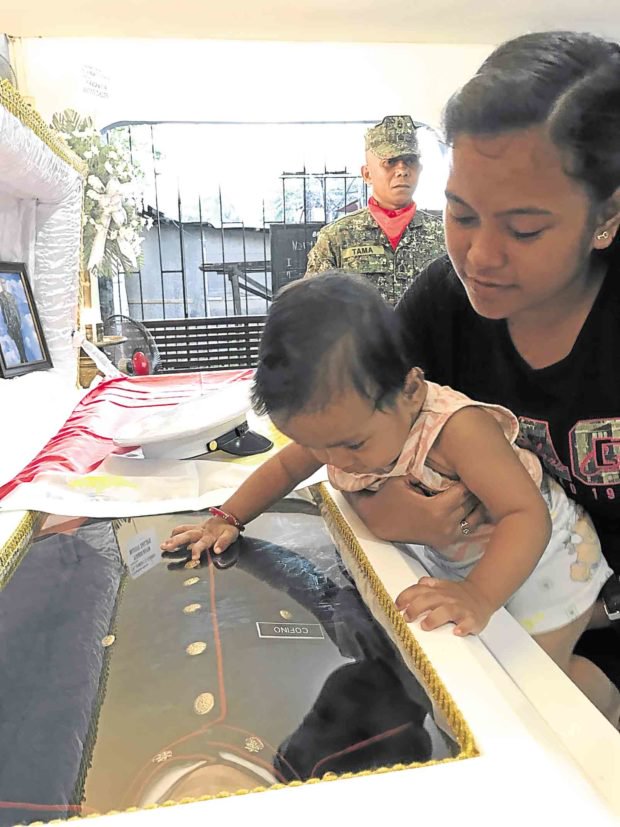 Photos circulating on the net showing him gazing at his father inside the coffin while saying, “Papa, papa”,  broke the hearts of many netizens.  His wife recounted the times when her husband made phone calls and video calls to check on them and be able to see them through a tablet.  PJ was tapping the glass of his father’s coffin which he might  perceived to be a tablet where they used to have a chat. Pronielyn said that the last conversation that she had with her husband was the day before he died.

She also mentioned that Cofino was able to speak with his mother, Aida,  whom he asked  to look after Pronielyn and PJ no matter what happened to him and also said that he really missed them so much. They didn’t know, that  would be the last time they would be able to speak with Cofino.

My heart goes to Pronielyn and PJ as it would be very hard for them to be living without a husband for Pronielyn and a father to the very young, PJ.

The news everyday contains reports about the battle that our soldiers face in Marawi.  At the end of the day, let us not forget also that behind their uniforms, some of them  are fathers, too. And on that note, a salute to all the soldiers who are also fathers battling in Marawi.  I wish you can have a time-out and celebrate Father’s Day, too!