If you are fascinated with creepy cemeteries, Czech Republic’s Sedlec Ossuary might just be the place you’re looking for.

Housing 40,000 skeletons of humans, the small Roman Catholic chapel located in the town of Kutna Hora was dubbed by The New York Times as “the world’s greatest single work of memento mori art.” 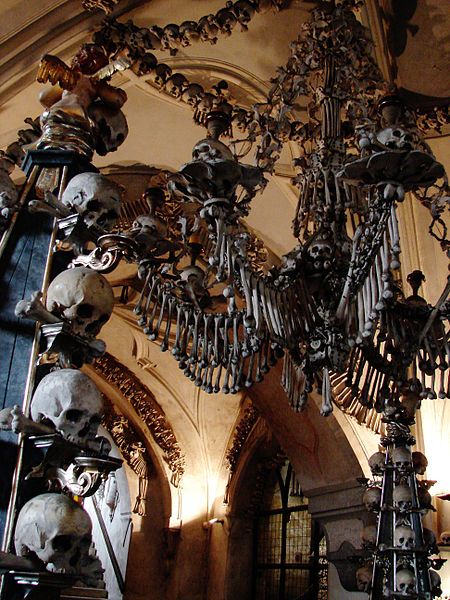 Serving as the eerie centerpiece of the chapel is its chandelier which is believed to contain every piece of the human bone.

In 1511, a Bohemian family known as the Schwarzenbergs hired a half-blind monk to unearth corpses and prepare the bones of Black Plague victims and war casualties to decorate the below-ground chapel. The task was rather difficult considering that the monk had to wait years until the worms consumed all the flesh.

In 1870, a local woodcarver identified as František Rint was then tasked by the royal family to create unique art pieces using the bones collected by the monk.

Now known as pièce de résistance, the chandelier is the main attraction in the gothic chapel which is visited by about 200,000 tourists every year.

Watch the creepy video below.

Between 1776 and 1804, a local priest named Vaclav Tomasek placed thousands of human bones n the walls and ceilings of Kaplica Czaszek, a chapel located in the old town of Czermna in Poland.

Thousands of human bones of victims of Silesian Wars as well as plagues and cholera were used to decorate the chapel as a “reminder of mortality and human salvation in the face of death”.

It is believed that Tomasek placed the bones of important people as well as deformed bones caused by diseases on the church’s altar. Allegedly, the priest did this to elevate those who suffered in death.

In 1804, Tomasek’s own skull was placed at the altar after his death.