What happens when you play Bon Jovi’s “Livin’ on a Prayer” in a stadium full of fans? They go dancing and cheering, of course. Yet one man took this to a whole new level when he started rocking and dancing to the beat of the rock band’s hit music.

At first, Celtics fan Jeremy Fry appeared on the big screen just snapping to the beat of the song. When his companion realized they are on the big screen, she nudged to tell him so. What followed was an awesome performance that had the team’s fans and netizens screaming and laughing with delight. 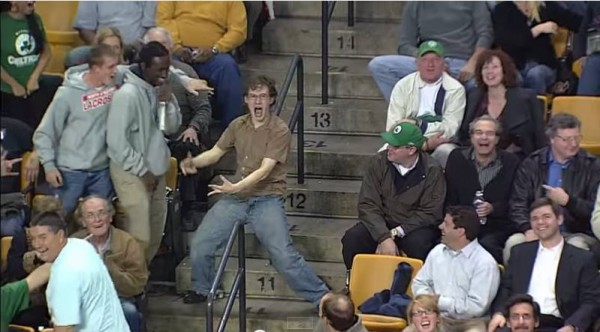 Knowing this is his one shot at fame, Jeremy got off his seat and began dancing while also singing along. He then made the song his own, so it appeared that he was performing in a concert. He went down the bleachers, shaking hands with other laughing fans, kissing a lady, hugging a guy, and jumping on the stairs.

Truly, it was the performance of his life – and the guys manning the big screen followed his movement down the stairs, much to the laughter of those who enjoyed his impromptu rock concert. Some people were skeptic that the whole ‘performance’ was staged – why else would the camera follow his antics, anyway? Others were ready to simply let the young man have a good time.

It was reported that Jeremy was interviewed after the game; he didn’t look drunk or stoned as some of the people implied.

Stoned or not, Jeremy certainly stole the show and made the people rock to Bon Jovi’s music in his 2 minutes worth of fame at a major sports event. There were also many who weren’t impressed or were they just jealous of this young man’s uninhibited performance?

Watch the video and tell us what you think.