After the tragic death of 26 students and staff members during the Sandy Hook Elementary School massacre in Connecticut in 2012, it can’t be denied that school children of all ages are at risk to mass shootings.

This is why American company Protecht came up with a child-sized armored blanket dubbed as “a quick, simple solution for maximum protection against a school intruder.” 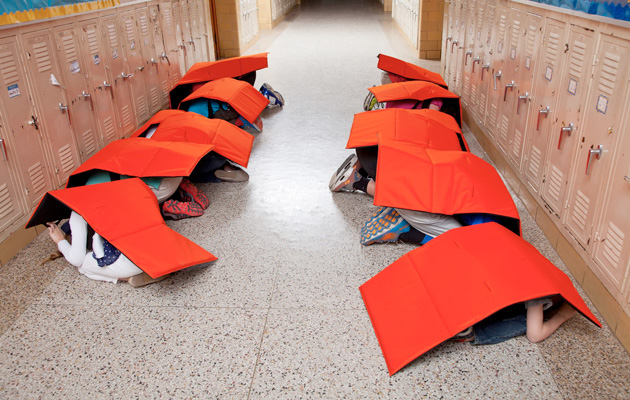 Known as the bodyguard blanket, this bulletproof yet lightweight blanket is made of a high-density polyethylene fibre and will prevent 9mm bullets from passing. Designed to have the same specs as the armors worn by the US law enforcement and military, the blankets can be easily stored inside classrooms. Children can protect themselves against mass shooters by hiding under this blanket.

Protecht says it in its WEBSITE: ”We are so confident in the protective properties of Bodyguard™blanket we are encouraging every administrator to make it an integral part of school and university lockdown protocol.”

The smallest size of the blanket costs a little over $1,000.

Mass Shooting Tracker, a crowd-sourced database built by Reddit users, claims there have been 353 mass shootings in the US this year. That means that the country has suffered more mass shootings than days have passed in a year.

However, the tracker defines mass shooting as any incident, whether it occurred in public or private, in which at least people are shot, but not necessarily killed.

Explaining the logic behind their criteria, Mass Shooting Tracker cited a nightclub shooting in Tennessee in 2012 as an example. The incident, wherein one gunman shot at someone and other patrons returned fire, resulted to 18 injuries and one fatality.

“Under the incorrect definition of mass shooting, that event would not be considered a mass shooting! Arguing that 18 people shot during one event is not a mass shooting is absurd,” MASS SHOOTING TRACKER explained.

Mother Jones, which counts mass shooting as any incident wherein a single gunman kills at least four people in a public place, says that there have been four mass shootings in the US in 2015.