It was a day to remember. Wearing a beautiful blue wedding gown adorned with flowers and butterflies, 25-year-old Guo Yuanyuan was enjoying a fun photoshoot with husband-to-be Xiao Liu on a beach in Dalian, north east China when chaos by the waterfront drew their attention.

Upon hearing that a man drowned and no one on the scene knew CPR, Guo who happens to be a cardiac nurse at the local hospital stopped the wedding photoshoot and ran towards the stranger as fast as she could. Understanding the urgency of the situation, Guo did not even stop to change her clothes and was upon the drowned stranger faster than Xiao. 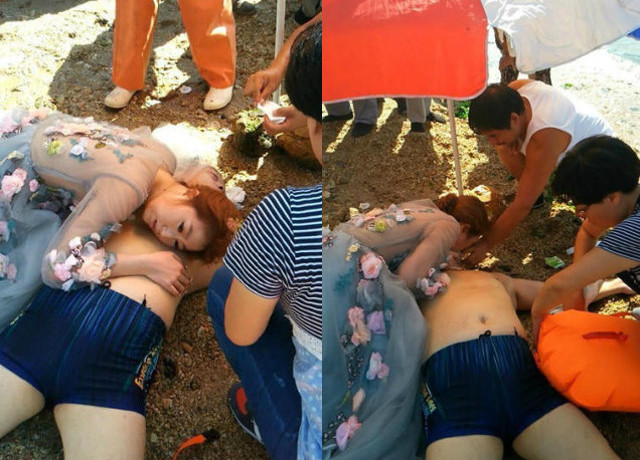 For 20 minutes, the lovely bride performed CPR and mouth-to-mouth resuscitation on the victim who was not identified but though the man appeared to splutter water at some point, he never recovered. Paramedics who arrived at the beach declared the man dead. Although it appears that he drowned while swimming in the waters, heart attack was the confirmed cause of death.

Meanwhile, Guo’s dress was tattered and many of the flowers fell off the wedding gown. Her nails were broken and make-up was ruined. But everyone is calling her as the prettiest bride in China. Even if the man eventually died, anyway, people hail her as a hero for sacrificing her own happy moments to try and save him, a stranger she had never even met before.

“At that time, I only remember that I was a nurse. My career’s responsibilities are higher than that of a bride,” says Guo.

As for proud husband-to-be Xiao, he laughingly revealed that Guo beat him in the race towards the drowned man. He proudly declared, “She enjoys helping people normally and that’s what I like about her.”

Drowning remains to be among the top ten causes of death across the world, ranking fifth in the US. It is believed that as many as 10 people die daily because of unintentional drowning which could have been prevented if the person knew how to swim.

Kids aged 1 to 4 years old have the highest drowning rates, especially if they are left alone even in a shallow swimming pool, basin, bathtub, or any body of water.