These days, it seems that people want to have the grandest of weddings – even if that meant spending all their savings for this occasion. After all, weddings are among the most special moments that could ever happen to a person’s life and, ideally, you only get married once, anyway.

But if you don’t really have that much money to spend on a grand wedding, why not choose a unique one instead?

Well, one bride in one of the provinces in the Philippines has found a way to make her wedding unique without actually spending a lot of money – and we all quite admire her carabao-drawn wedding carriage! 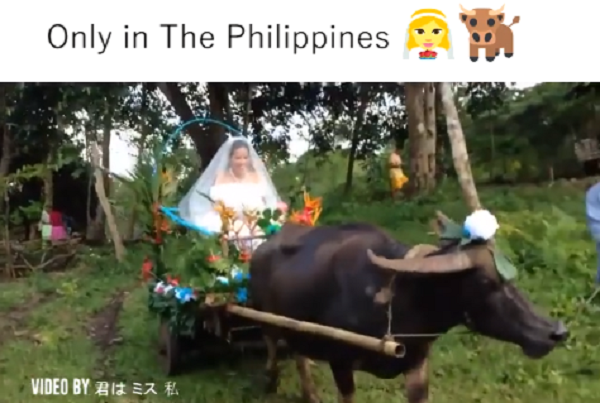 For her ingenuity, she has won the internet; the video of her grand entrance on that carabao carriage has gained over 4 million views on Facebook page, Tee Radio. We’re willing to bet there are other posts of her wedding video on other Facebook pages and accounts, too.

Now, the bride looks quite amused with her unique carriage and was seen laughing as she took that ride yet we also know that she was very pleased with the results.

Carabaos are beasts of labor. In the provinces of the Philippines, carabaos not only help plow the field, they are also used as a means of transportation either by carrying passengers or drawing a sled where people and goods can ride.

So, it was but appropriate that this bride has chosen a carabao-drawn carriage for her wedding. Decked with flowers and various decorations, this carriage looks quite grand. It won’t match the elegance of a limousine but it’s a true blue Filipino symbol.

What is a Carabao?

A carabao is a type of domestic animal native to the Philippines. Also known as a water buffalo, carabaos are heavy duty animals that can withstand hard labor in the fields.

The carabao is the national animal of the Philippines.