A brave guy dared to open a burger stand in front of a McDonald’s outlet. Surprisingly, he gets applauded by the company who called his venture as “impressive”! Wow.

When opening a business of any kind, many budding entrepreneurs often steer clear of big-time competitors, particularly multi-national companies who often have the lion share of the market. But one guy in Kepong, Malaysia, recently went viral after doing the exact opposite.

In a post on Twitter, Sufri (@craz33sufri) shared a photo of a vendor selling the locally popular Ramly burger just across the street from a large McDonald’s outlet occupying a corner lot.

“A rather daring attempt…” Sufri tweeted. 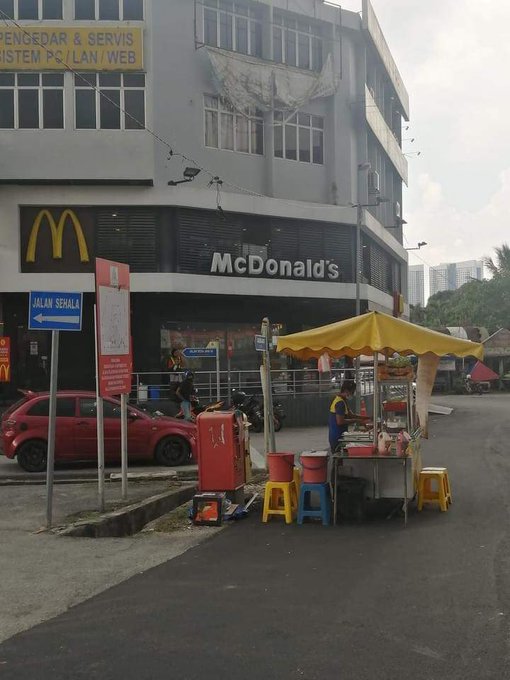 The tweet swiftly went viral, with many netizens applauding this guy for being brave enough to sell his burgers in front of that McDonald’s outlet. Considering that McDonald’s, one of the world’s biggest and most popular fast food chains, also sells burgers, this burger seller’s actions are truly daring – and he’s earned respect from the business community.

Many locals also defended his business strategy, commenting that the guy was quite brave enough to do this because he knows that his burgers are delicious and would still sell even if his spot is in front of McDonald’s.

“Of course, he should be daring! Burger Malaysia is more delicious!” one netizen commented.

“There’s also one called Daily Burger near Gombak that’s like this. Open opposite Mcdonald’s but there’s always a waiting line during lunch hour,” another chimed in.

As the tweet garnered attention, it would soon reach McDonald’s Malaysia. Surprisingly, the fast food chain seemed to support the burger seller and even retweeted Sufri’s post with the caption, “Impressive.” Wow.

Ramly Burger is a popular burger brand in Malaysia. Founded in 1984, the frozen and fast food company is owned by Ramly bin Mokni through Pemasaran Ramly Mokni Sdn. Bhd.