Pregnant at 34 weeks, Ashly Moreau had gone to the bathroom at their house in Sulphur, Louisiana last August 11, only for her water to break while she was still at least a full month earlier than schedule. Seeing so much blood gushing out, she called out to her son Jayden Fontenot for help.

Her fiancé, Kelsey Richard, had just gone out to work and it was only her, Jayden, and her 11-month-old daughter at home when her water broke. The baby was in breech position and his feet were already sticking out.

Realizing the gravity of the situation, the young boy rushed to the house next door where his grandmother lives but because the old lady recently had surgery, she could not go with the young boy to help his mother. Instead, the old lady called 911 as Jayden rushed back his mom. 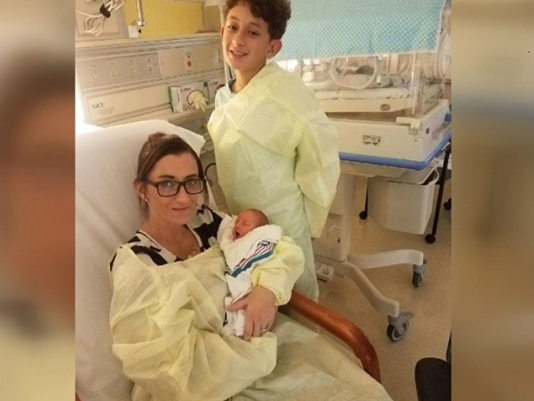 “When he [Jayden] got to the bathroom, he just took a deep breath and said, ‘OK, Mom, just tell me what I need to do.’ He didn’t look scared, he looked calm and brave and I said ‘OK, I’m going to tell you what to do and we need to get your brother out as fast as possible because he’s breeched and he can’t breathe,’” Ashly recalled.

Once the baby was out, they both realized he wasn’t breathing. Jayden ran to the kitchen to search for his sister’s nasal aspirator. He used it to clean his newborn brother’s nose and eventually got the little one to breathe.

Emergency responders arrived at this point to rush them to the hospital. The baby was placed in NICU but he survived. 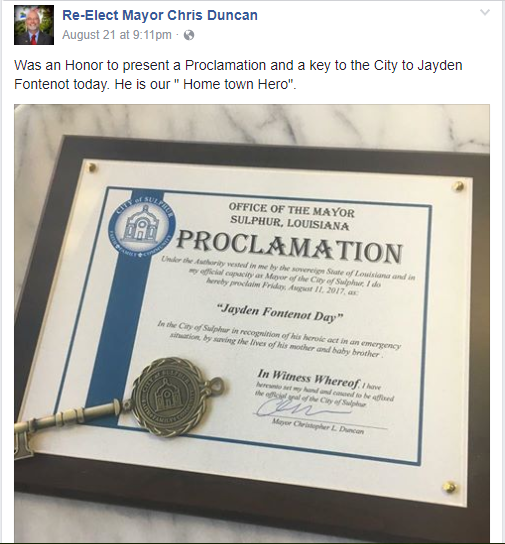 The doctors praised Jayden for his heroic actions, saying Ashly and the baby could have died without his help. For his heroism, the young boy was later awarded by the mayor of Sulphur with a ‘key to the city’ and a citation proclaiming August 11 as Jayden Fontenot Day.