When the bandages on Carter Gentle’s surgery wounds were removed, the 7-year-old boy cried his heart out because he feared the scars made him look ugly. The boy suffers from congenital heart defect and has had 12 surgeries, the latest of which was to repair a pacemaker he has been using since birth.

His chest already has numerous scars from his previous surgeries, especially because he had undergone 5 open-heart surgeries! Poor child…

We could easily understand why he cried for 45 minutes after seeing those angry marks on his skin.

His dad was brokenhearted but wished to do something to take away the boy’s pain. So, he posted the child’s photo on Facebook, asking his friends to commend the boy by liking the picture. 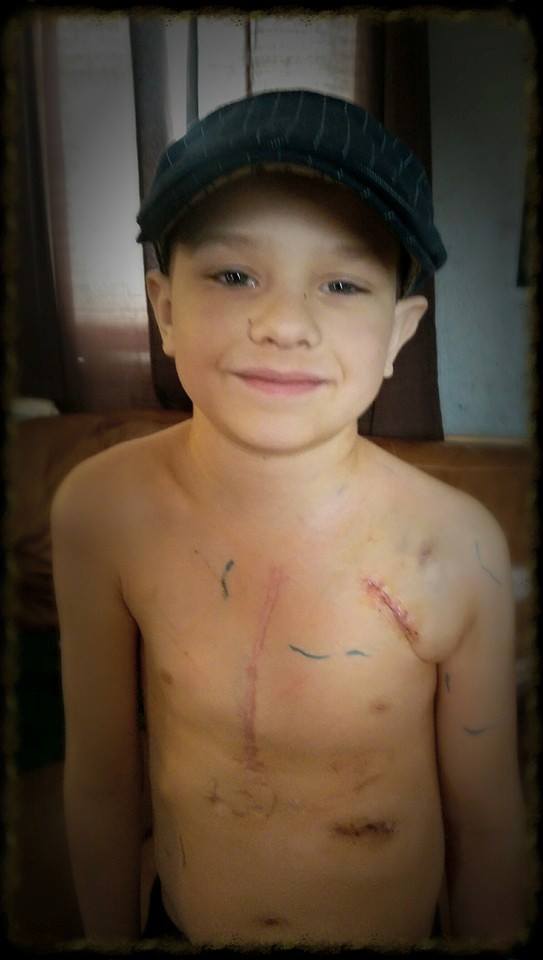 ‪#‎CHDAWARENESS‬ We were a little apprehensive to post this but I feel it’s important. Carter took his bandages off this morning. He cried for 45 minutes when he saw his scars. He said that he’s afraid people will think he is ugly. This was hard to hear as a parent. We told him that his scars are beautiful and make him look like a superhero. How many likes can Carter get for his bravery?! Feel free to share. ‪#‎CartersSong‬‪#‎HeartHeroes‬ ‪#‎CHD‬

What began as a call for support from his friends quickly turned into a viral post which reached over 1.5 million people who liked the photo and offered words of encouragement to the child. Many told the boy how brave he was and how the scars were the marks of the superhero that he is.

The overwhelming response from strangers gave the boy the much-needed encouragement to feel happy again. He now feels proud of his battle scars and thanks everyone for their messages.

Thanks to Facebook and the many wonderful people who commented on and liked the photo, this young warrior is feeling great again.

This condition is an anomaly that affects the heart. Just as its name suggests, the condition is present at birth.

There are many different types of congenital heart anomalies, most of which have to be corrected as soon as possible so as to increase the child’s chances of survival. The condition is the leading cause of birth defect-related deaths, resulting in over 300,000 deaths every year.

There are also different reasons why an unborn baby can develop this defect, including maternal obesity, genetic reasons, and environmental factors such as use of drugs as well as ailments the mother contracted during pregnancy.