All his life, Hayden Trigg of Austin, Texas (USA) has been confined to a wheelchair because of cerebral palsy and spina bifida. This, however, did not hamper his zest in life; though he has to rely on his wheelchair to have fun outdoors.

Often, he only watches other kids play in treehouses or enjoy the playground because not too many facilities have provisions for wheelchair-bound kids like him.

Hayden’s mom, Adrienne Trigg, wrote to the Make-A-Wish Foundation for a wheelchair-accessible treehouse to be made for him in their one-acre property where there are lots of 200-year-old oak trees.

The foundation granted the request. A local contractor, Austin Tree Houses, etc., was tasked to make the treehouse for Hayden. 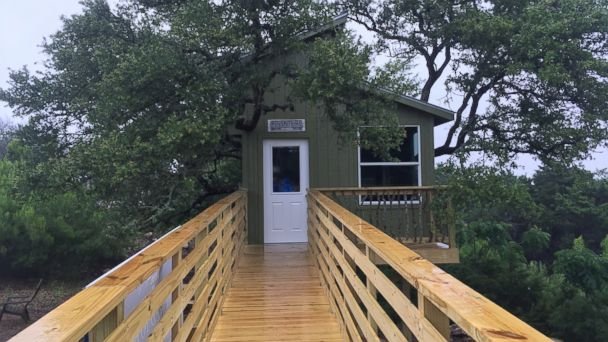 Throughout the treehouse’s construction, Hayden excitedly watched – even if it was raining! When the treehouse was finally finished and ready for occupancy, the boy was so excited that he took his manual wheelchair up and down the 65-foot-long wheelchair ramp by himself. This was a feat for the 7-year-old boy, his mother revealed.

Adrienne said, “He has very low muscle tone, so it’s hard for him to go long distances in his manual chair. For the very first time, he took the manual chair up and down the ramp because he was so excited.”

After the treehouse was finished, a busload of Hayden’s classmates went on a fieldtrip to his home so they can also enjoy the special treehouse.

His happy mother revealed, “It was the best day of his life. His wish was to share it with his friends. He’s got to be the most popular kid in school right now.”

The new treehouse is not just a place to play for Hayden but has also become a real extension to his home. He now completes his physical therapy in the treehouse – and this seems to have done him a lot of good because he is now more motivated to break barriers for himself, Adrienne happily revealed.