But there’s this cat who ruled the internet for a day when he decided to show some moves as a ‘boxer cat’ while watching a boxing match!

Indeed, this cat is extra special because instead of looking indifferent to the boxing match, it was actually following the fighters’ every move – and, amazingly, was also boxing the air just like any avid boxing fan trying to ‘help’ their favorite fighter! This is so great to watch, actually. 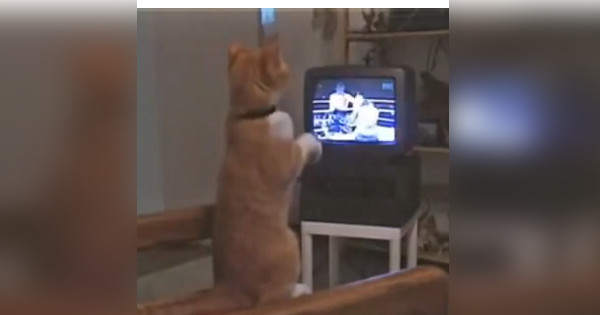 Screenshot from video by I Love My Cats / Facebook

While the fight scene showing on the screen didn’t reveal who the fighters were, it was easy to see that this boxer cat is a big boxing fan. Of course, big boxing fans would surely recognize the fighters even on this rather grainy video from a pixelated screen — who do you think they are?

Netizens were pretty amused with this cool cat and his boxing moves. Some suggested that he should be renamed ‘Meow Hamad Ali’, a play for “Muhammad Ali’, of course.

Just check out his cool moves in this video:

Who is Muhammad Ali?

Muhammad Ali, born Cassius Marcellus Clay Jr., was an American professional boxer and activist. He was a boxing legend and was definitely one of the most famous boxers of all time.

Known for his controversial thoughts and activism, Muhammad Ali was a prominent figure both in and out of the ring. In June 2016, he died of septic shock — decades after being diagnosed with Parkinson’s syndrome just like many other boxers.