Baby Charlotte was born deaf. Despite her parents not having a history on both sides of the family of having the condition, the child developed the condition in the womb. Doctors are still trying to determine what really caused her to go deaf but one thing is for sure, she also can’t get cochlear implants until she’s old enough to handle the surgery.

Charlotte’s mom Christy Keane feels bad that her baby couldn’t hear how much she is loved by her dad and mom. She hopes that there would come a time when Charlotte would finally hear them tell her how much they love her and how much they would sing her to sleep with a lullaby.

Doctors told Christy and her husband not to give up hope that Charlotte could hear. While waiting for her to be old enough for the cochlear implants, the doctors thought of fitting her with hearing aid. 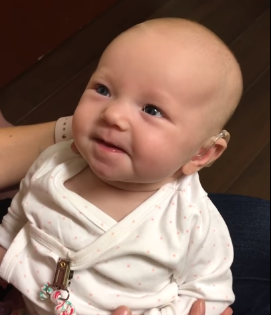 In a clip that has since gone quite viral on YouTube, Christy could be seen holding Baby Charlotte who seems to know there’s something extra special about that moment.

Charlotte watched her mom and gave her a smile but once Christy says “I love you”, the baby becomes rather emotional and nearly cried. At her young age, she probably has no idea what the words meant but she felt their meaning, anyway. 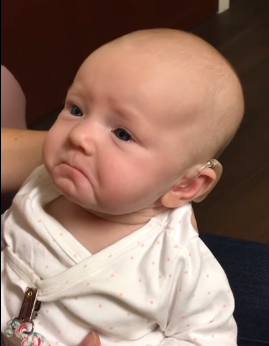 Christy shared the video on Facebook where it quickly went viral, hitting 10 million views within just a week. She has since posted this on YouTube where it also went viral, garnering close to 700k views.