Back in 2013, overweight guy Jesse Shand, then 26, was living a miserable life.

He was really ashamed about his body he didn’t like going outside his house since people often laughed at him. Taking a shower is even a struggle for him since, according to his own admission, he couldn’t even fit in his own shower. He simply spent most of his time “playing computer games” or “trolling the internet.”

“Negativity was all I had and all I was about,” he confessed on his website.

One day though, he thought it would be funny to create an account on a bodybuilding forum and troll them. He even posted some of his photos and began a thread entitled “Ask the fattest man on this site anything.”

Unexpectedly, things got pretty interesting from there.

He thought people there would ridicule him but the community was rather friendly and they offered him lots of support, assuring him that it’s not too late to turn his life around.

“I had a million excuses and reasons that I couldn’t do it,” said Shand. “I argued that it would take years of dedication and willpower that I simply did not have. Slowly, over time, the many voices wore me down and started to convince me that it was worth another shot.” 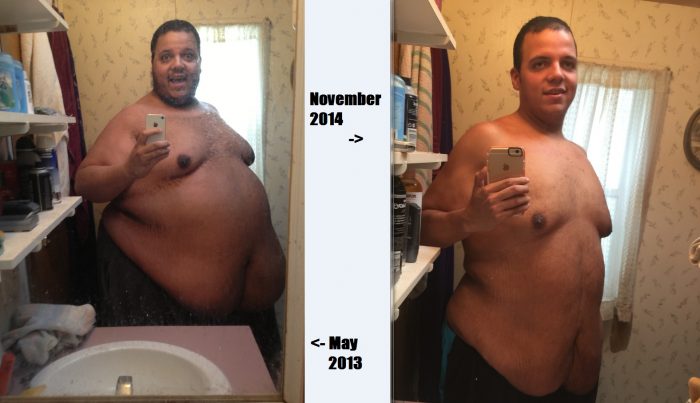 With a little help from his new online friends and with a lot of hard work, Shand successfully slimmed down from almost 700 lbs. to 306 lbs in just 2 years. Right now, he is raising funds for loose skin removal.

You can watch his video here:

Regular exercise and proper diet is undeniably an effective combination when it comes to shedding excessive fat. It definitely takes more than that, though, as Cosmopolitan shared. Living a healthy lifestyle is actually crucial.

According to the blog, merely turning off the TV can be a big help since a study confirms that “Dining while viewing can make you take in 40 percent more calories than usual.” The same can be said regarding texting, driving, or “any other distracting activity.”

Additionally, monitoring your weight on a daily basis can be a good idea. “If your regular weight increases several days in a row, it’s a red flag letting you know you need to cut back a little or beef up your workouts slightly.”