While you probably see a lot of blind people begging in the streets or in front of a church, alone or with a companion, there are also many who chose to earn a living without using their disability to just ask for alms.

One man called ‘Uncle Loke’ inspired netizens after his story went viral because despite his condition, he did not ask for money from people but sold magazines at the side walk or at the parked cars by the roadside.

According to netizen Sherena Lee, the old man was by himself and would touch the cars by the roadside so he wouldn’t wander into the traffic. 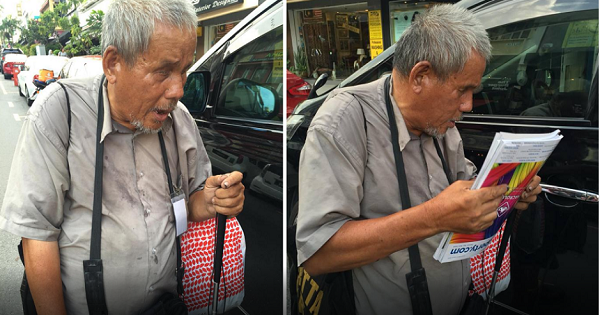 Lee and a friend bought him some food; though he first tried to tell them he wasn’t hungry. When they left him, the old man hurriedly ate the food – and Lee was touched seeing that because Uncle Loke tried to show that he was tough and independent despite the fact that he was actually hungry.

The old man did not know that the ladies saw him eat the food because he was, after all, blind but his actions showed that he had great pride in his independence — and that he does not want people to take pity on him just because he was blind.

Blindness is a condition wherein the person is not able to see as he/she lost his sense of sight due to certain reasons. While most blind people were born with the condition or eventually lost their sight due to old age, there are also those who got blind due to accidents.