MANILA, Philippines- The recent death of Mark “Pompo” Arroyo, the 32-year-old team captain of Smart Triathlon has pushed supporters of bicycle lanes to call for changes in the Philippines.

In a lengthy Facebook post, We Want Bike Lanes in RP Movement urged President-elect Rodrigo Duterte and Vice-President-elect Leni Robredo to take swift action in creating “life-saving bike laws” which will protect all cyclists in the country, particularly the vulnerable and the marginalized. 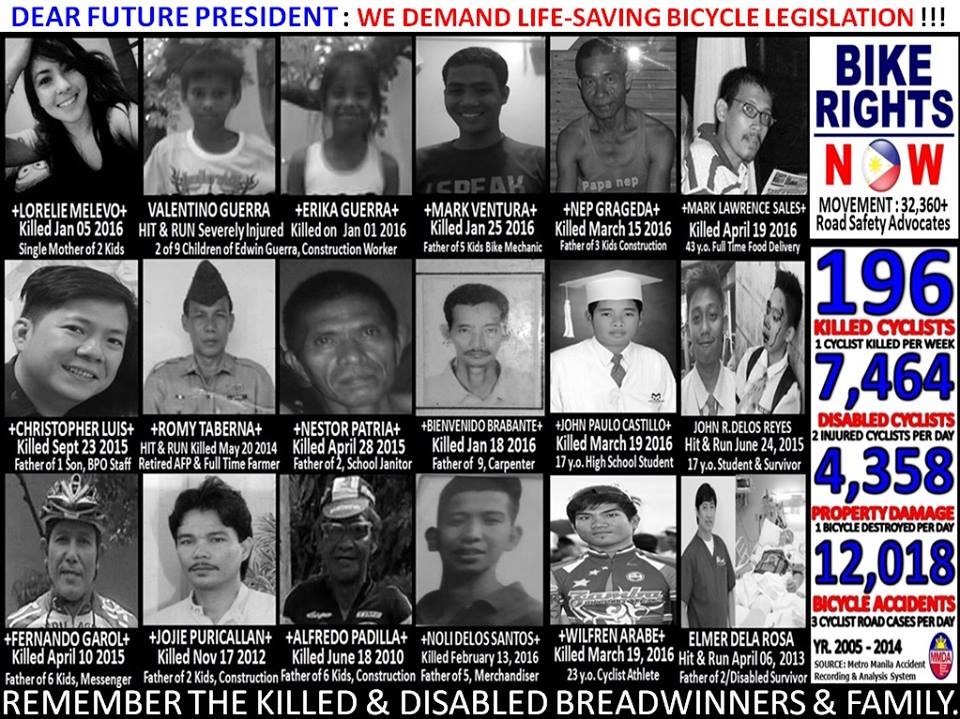 Also known as “Captain Pompo” to his close friends, Arroyo was run over by a wayward truck on Saturday June 25, near Avida Subdivision and Dalig National High School in Antipolo, Rizal while cycling. The suspect, Ruel Azucena, is currently under the custody of Antipolo police and will be facing inquest proceedings.

The post also revealed that 196 lives had been taken while 7,464 had been disabled in various bicycle road accidents in the country.

“The Public Trust we have given you last May 09 2016  is your chance to Alleviate this Human Loss, Redeem this Sacrifice, and Vindicate this Carnage.LET THEIR DEATHS BE THE LAST,” the post reads.

The group is also urging netizens to sign the petition titled: “DEAR FUTURE PRESIDENT : WE DEMAND LIFE-SAVING BICYCLE LEGISLATION FOR MARGINALIZED SECTOR.” As of this writing, the petition on change.org has amassed over 12,000 signatories.

In June 2015, Rep. Samuel Pagdilao of party-list ACT-CIS filed a bill that will put bicycle lanes in all primary and secondary roads in the country.

House Bill 5810 or the Bicycle Lane Act of 2015 aims to ensure the safety of those using bikes as mode of transportation particularly bicycle-using labor force.

“Many of these Filipinos are construction workers, messengers, and other low income earners who pedal to work everyday not necessarily to promote a healthy environment but merely to cut the cost of their transportation expenses,” Pagdilao explained.