For a period of 40 minutes, users of social media sites Facebook, Instagram and Tinder were not able to access their accounts. Lizard Squad, an infamous online hacker group, has claimed the responsibility for the outage.

On Monday, the hacker group reportedly associating itself with Islamic State, also claimed responsibility for the hacking of the website of Malaysia Airlines. The group also asserted that they were the ones who hacked Sony PlayStation Network and Microsoft’s Xbox Live network  last December.

Meanwhile, a spokesperson for Facebook denied that the social network blackout was caused by hackers.

In a statement sent to CNBC, the spokesman wrote: “This was not the result of a third party attack but instead occurred after we introduced a change that affected our configuration systems. We moved quickly to fix the problem, and both services are back to 100 percent for everyone.”

Meanwhile, a netizen posted on Monday, January 26,  his sentiments to have Facebook banned in his barangay. The post was made almost 24 hours before the social media sites went offline.

In the alleged Facebook page of the chairman of  Barangay Salawag in Dasmarinas, Cavite, he mentioned his intentions to pass a law that will prohibit the use of Facebook in his barangay. According to the post, the use of the social network should be banned because it is promoting rape crimes in their barangay as well as other areas in the Philippines. 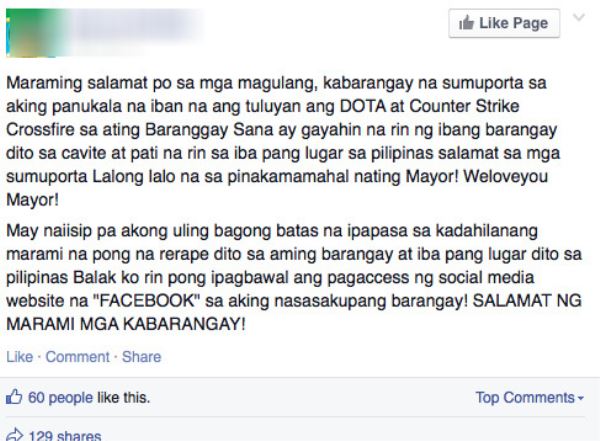 Last week, a resolution banning the multi-player online game Defense of the Ancients (Dota) was issued by the same barangay.