Five band members located in 5 different locations, at different parts of the world created an awesome Sweet Child O’ Mine video that would blow your mind.

Just imagine how difficult it was for these guys to achieve such a feat: playing their instruments and singing in synchrony when they are not together in one studio room yet they were able to create something so great it sounded like they were recording it in the studio. 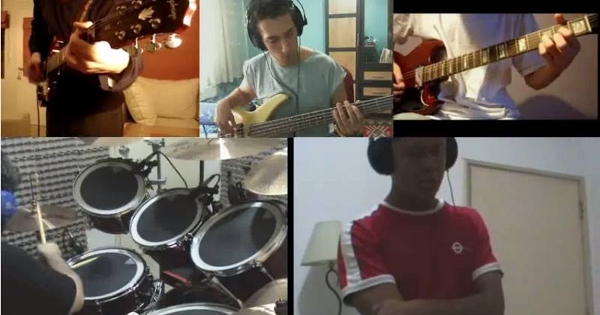 This mind-blowing video is bound to make you proud, too, because the lead singer is a Filipino – and he sounded just like Axl Rose! How awesome can that get??? #ProudtobePinoy #PinoyPride

Meet Jerbert Forte, the Pinoy lead singer in this joint effort; notice how he sings from what appears to be his bedroom, not a studio, yet the voice quality was captured perfectly.

Providing excellent music for this Pinoy Axl Rose are awesome musicians from around the world – who appears to have also recorded their parts in the comforts of their own home. It was only the drummer who seems to be recording his piece in a studio-like setting.

What’s quite surprising about this amazing international collaboration is that it never went viral. These guys deserve to top the hit charts for weeks with this Sweet Child O’ Mine yet the video has only been viewed 42,500+ times since it was uploaded in 2010!

Now, what do you say we make this viral so the world can hear about another awesome Filipino talent and this fantastic Guns n’ Roses cover? Here’s the challenge: let’s try to make this video reach at least 500,000 views before the year ends.

RachFeed joins a collaboration with News and Entertainment site Barako Newsline and Coolbuster to make this video viral. Let’s show the world the power and talent of awesome Pinoys like Jerbert Forte and his international band.