Jayvi Vilar was shocked to discover that someone had drained his BDO account of cash – even if he still has his ATM card in his possession and the last time he had used it was inside a bank’s premises which one would think is more secured than others located outside a bank!

In a post on Facebook, Vilar narrated that he had last used an ATM at Bonifacio Global City (BGC) in Taguig, Metro Manila in the Philippines; specifically inside the BDO Picadilly Star branch.

Thinking it was a secured ATM, he did not think much about the transaction until he discovered that all his money was lost because someone had apparently made a copy of his card via ATM skimming and used this to withdraw his money from a branch of Philippine Business Bank (PBB) ATM in Calamba, Laguna.

The crooks were able to withdraw at 10PM on February 19 for a total of Php31,400 plus service charges. 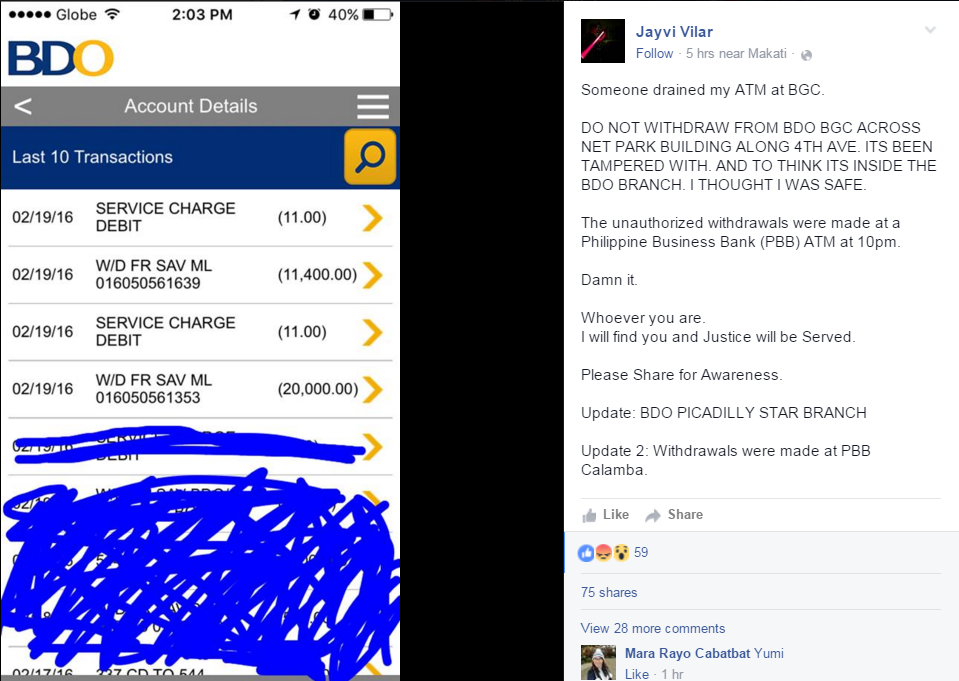 It is highly likely that the bank might refund his money but it would surely take months of thorough investigations before this could happen (if the bank would refund him, that is); otherwise, it would seem that his hard-earned money just went down the drain because some crooks stole it.

He warns the public not to use the ATM at the BDO Picadilly Star branch at BGC because he believes that this was the tampered ATM used by criminals to steal his money.

ATM Skimming in the Philippines

There have been a number of reports relating to ATM skimming in the Philippines – while some crooks have been apprehended, most are still free to tamper more ATMs and steal other people’s hard-earned money.

In a previous article, we detailed how Bank of the Philippine Islands (BPI) has started sending its clients email alerts (SMS alerts for enrolled accounts) to inform them whenever transactions were made on their account.

Although this will not prevent the ATM card from being skimmed, it could at least help the client stop additional withdrawals from the fake card immediately after discovering the crime. Hopefully, this could ensure that not all the money will be stolen from the account.