The leftist Makabayan bloc decided to “Occupy DepEd” (the Department of Education building) mere days after representatives of women’s group Gabriela (also part of the bloc) met with assistant DepEd secretary Elvin Uy to discuss their concerns regarding the education department’s upcoming full implementation of the much debated K-to-12 program.

In a post on Facebook, Uy revealed that he had a dialogue with members of Gabriela last Friday, May 20. He was, however, puzzled why some members of the group were also picketing outside the DepEd building considering that he was already having a dialogue with their representatives.

He was informed that it “standard for them to do this even if there’s a dialogue”. Not wanting to curtail the group’s freedom of expression, Uy did not bother asking them to stop their protest action, saying that this was but part of democracy.

Uy did not reveal details of the dialogue; though he mentioned that the group’s concerns were discussed, such as where kids can enroll when not all schools offer senior high school.

But it surprised Uy to discover that yesterday, May 26, mere days after the dialogue with Gabriela, members of the Makabayan bloc entered the DepEd building. They pretended to be visitors before launching their “Occupy DepEd” protest action at noon time. 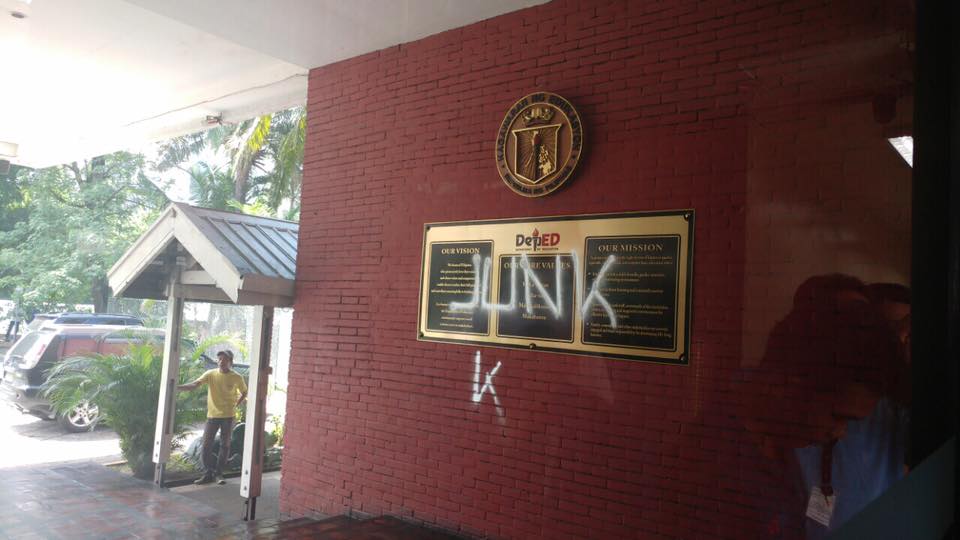 Despite pleas from the staff, they refused to leave the building. What irked Uy is that the group was not just content with disrupting peace in the office, they had also defaced the DepEd marker in front of the building with spray paint just because, well, they wanted to junk K-12.

Uy slammed the group for the rude action, saying that the DepEd had been conducting peaceful dialogues with various groups pro and against the program.

Indeed, the group was allowed to exercise freedom of speech while protesting inside the DepEd complex but they surely did not have any right to vandalize the building just because they do not agree with the education department’s program.