Have you ever had a bad flight experience? This woman absolutely has.

Recently, this passenger boarded AirAsia for a 4-hour-trip from Bangkok Thailand to X’ian, China. Little did she know that it was going to be the most annoying flight of her life. Why? Well the woman behind her rested her bare feet in her armrest the entire time. 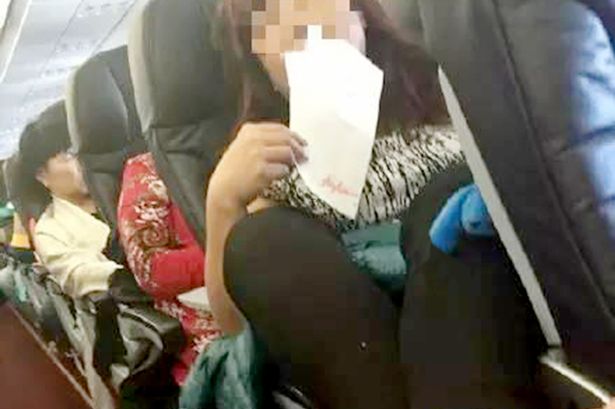 Irritated by the bad manners of the woman, the passenger talked with one of the flight attendants about it but to her shock, she was simply told, “I’m sorry. We can’t do anything. They’re all Chinese.”

She then decided to take action by taking a few photos and then sharing them on Sina Weibo, a Chinese microblogging site. The images then went viral.

The complainant, who chose to be known only as Wu, shared that the only time the rude passenger took her feet down was when she stood up for a bathroom break.

Asked by others why she did not confront the woman, Wu said “The passenger was travelling with a huge group of middle-aged women just like her. We were only two, and I was afraid my comments would cause an argument.”

As an aircraft passenger, there are certain do’s and don’ts that you should observe to make the flight pleasant for you and others.

For example, while it’s often relaxing to recline your chair, make sure to be considerate with the person behind you. It’s usually a good thing to ask them for permission first. However, do not recline at all if the passenger behind you is pregnant or tall.

Suitcases, on the other hand, should be placed in the overhead bin and not anywhere else. Keep items you need (such as your gadget or toiletries) in your hand-carried bag so you don’t have to reach for your suitcase every time.