An angry wife who spotted her husband getting inside a motel attacked his mistress afterwards but the man was quick to go in between the two ladies and prevent his legal wife from hitting the other woman who was identified as a teacher.

Myc Guianaton shared on Facebook two videos of the confrontation, both of which went viral on social media as many netizens took her side.

Guianaton said that the woman in the video is her husband’s mistress, a teacher whom she named in full in her Facebook post. While she didn’t mention it on her caption, she later explained in the comments’ section that she spotted her husband and his mistress getting inside the Jade Inn Lodge in Santa Cruz, Maribel, Koronadal City. 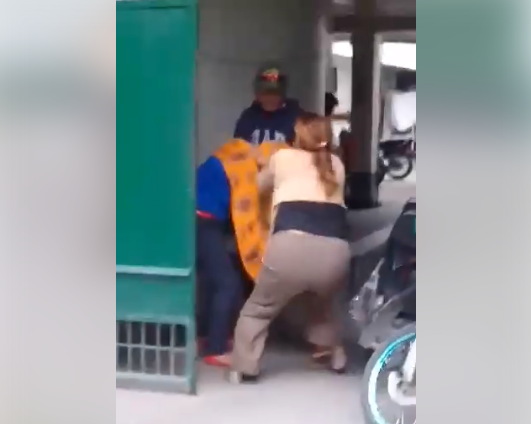 The angry wife quickly tried to get inside but was prevented by staff of the motel. So, she and her friends waited until the cheating pair went out of the motel. It seems that the motel staff did not also tell the pair that she was waiting outside.

The moment she spotted the two heading out of the motel, Guianaton made her move and grabbed the mistress by the hair. Taken by surprise, the two tried to step aside but the wife was so angry that she did her best to attack the mistress who immediately covered her head with a cloth, seeing that someone was videotaping the incident.

Seeing his mistress under attack, the man came in between the ladies and made a move to separate them. He was successful in doing so after a few minutes and the mistress quickly made a move to get away from the scene while the husband firmly held his wife so she couldn’t attack his mistress a second time.

Sadly, a lot of netizens took the mistress’ side, laughing at Guianaton for ‘not taking care of herself’ and for ‘becoming fat’ so that her husband looked for another woman! Others also slammed her for hitting the other woman when she should have punished her husband instead!

What can you say about that?