MANILA, Philippines- Netizen Peach Lopez has warned against scammers threatening to kill their victims through text messages. In her viral Facebook post, Lopez shared her friend’s close encounter with a scammer who issued death threats in order to extort money.

According to Lopez, her friend sought her help after being harassed and receiving death threats in text messages from an unknown sender. Initially, she tried to pacify her friend after sensing that everything was just a scam. Lopez, however, eventually gave the contact number of her cousin who knows someone from the National Bureau of Investigations (NBI). 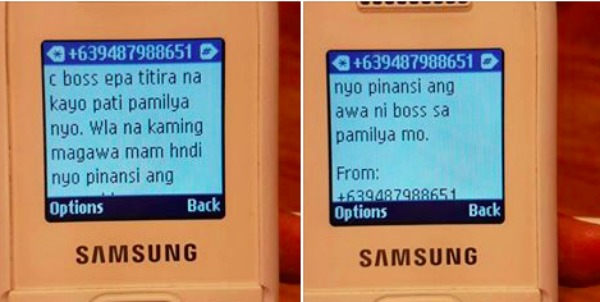 “These people will continuously harass you and tell you that they will kill you and your family. And then they will say that naaawa sila sayo kaya hihingi na lang silang pera para pamasahe ng mga tao nya palayo para pag nalaman ng kliyente na hndi nila pinatay, malayo na sila. They will also ask a specific amount ranging from P20, 000 – P100,000 depending on your gullibility and intensity of fear. Then they will ask you to send it to Palawan Express,” wrote in her post.

The alleged scammer also tried to convinced the unsuspecting victim that they are authentic by telling the name and street where the victim works or lives. Lopez believes that the alleged scammers possess a certain gadget or use online breadcrumbs in order to do this.

Her friend almost gave money to the scammers but eventually came into her senses after asking them questions that proved it was indeed a scam. Furthermore, she advised her friend to report the incident to the NBI.

Here are some tips from Lopez to prevent scammers from victimizing you:

3. Never ever put online your personal details unless the site is reputable and heavy in security.

Scam, according to the Merriam Webster Dictionary, is a dishonest way of making money by deceiving people.