Home
Entertainment
After 10 Years, This Man Had A Heartwarming Reunion With His Dog

As a 14-year old boy, Adam Mahon felt extremely sad about losing Roxanne, their family dog. This was a decision that the family had to do in 2007 because they were losing their home and couldn’t take the pet with them.

Adam never owned another dog since then.

In an interview with NBC26, Adam said “I haven’t gotten my own dog since I lost Roxanne.” He also added, “I don’t fault my mom for it at all. It’s something that we had to do.”

Now 24 years old, Adam finally had the chance to be reunited with his beloved pet – and it has been a heartwarming moment for everyone who witnessed it. 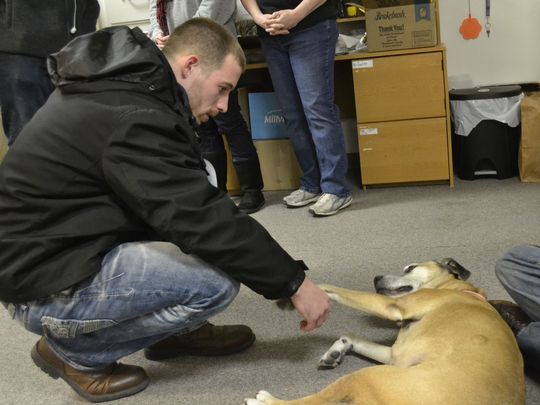 This became possible when volunteers from the Safe Haven Humane Society got in touch with Adam, now a Milwaukee resident. They said they scanned Roxy’s microchip and discovered that it had a number that’s about 10 years old.

“Scanned her and found out she already had a microchip… it was kind of a tough call whether we wanted to reach out or do some digging to find out who those people on the microchip were because it has been over a decade.”

After doing some research, they finally found the dog’s owner.

So the reunion finally happened. Adam was obviously filled with gratitude after seeing his beloved pet is safe. Although he couldn’t take her home because of his house’s condition, he is thankful and happy for the chance to see his pooch again.

You can watch the touching video here:

Truly, the bond between a boy and his dog can be very strong.