Puppies get excited so easily and love to play even while eating that many owners find themselves needing a new pair of shoes or slippers because their new babies have chewed on the items while feeling the urge to have some fun.

But one puppy has gained much popularity on social media after he was seen nearly making a back flip while excitedly eating his dinner. Awwwww. Isn’t that adorable?

This adorable little pup is identified as a Boston terrier, quite possibly just a few weeks (or days?) old. While eating what appears to be his rather unappealing food, the puppy was actually feeling so excited about it that it would soon appear the lower part of his body was beginning to defy the laws of gravity.

Could it be that the food he was eating was really just going into his head, literally, causing him to lose balance? 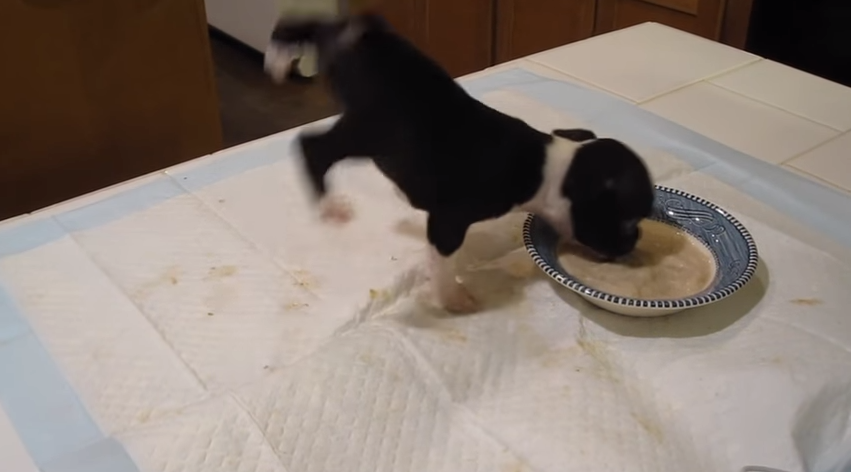 Well, the best explanation would really be that he was just too excited about it that his muscles just had to stretch out and he’s actually making a handstand as a trick but because he was eating, the rest of his body didn’t exactly coordinate well and cooperate with that his mind was trying to think about – or that’s what we would like to think, anyway.

We’re quite sure this adorable pup had some serious explanation as to what it was trying to do but he’s too busy eating to answer your questions. LOL.

Check out his cute little back flip in this video. Have your pups done something like this, too?

What is a Boston Terrier?

A Boston terrier is a small breed of dog that originated in the United States. It is often classified as a ‘toy dog’ breed and ranks as the 21st most popular breed in 2016, as reported by the American Kennel Club.

The breed is typically friendly and happy-go-lucky, truly perfect as a pet even for families with small kids.