While it’s not uncommon for actresses to undergo surgery in order to reconstruct their nose, this 41-year-old actress’s reason for going through nose surgery is something out of ordinary.

After a flesh-eating bug called necrotizing fasciitis ate away her face, Lois Temel had to go through five medical operations to rebuild her nose. 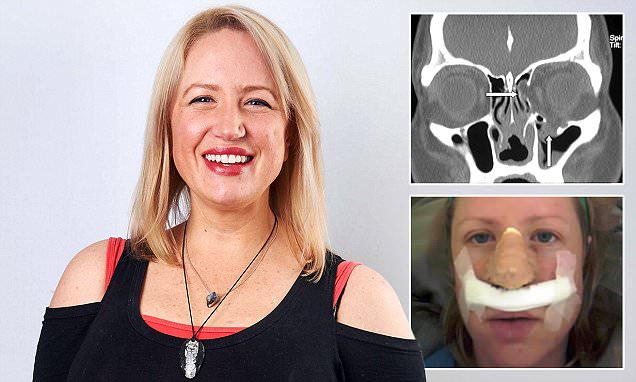 Apparently, the actress from Ryde in the Isle of Wight caught the disease while helping homeless people. Lois became infected with tuberculosis which lowered her immune system. As a result, she was easily infected with the devastating disease.

Initially, Lois didn’t show  symptoms except for constantly feeling tired and weary. She sought the help of doctors for a year but they failed to diagnose her condition.

“At first I didn’t have any pain in my face – I just felt really run down and weary all the time,” she told The Daily Mail UK.

But after a medic placed a camera inside her nose in 2008, they discovered that the bacteria had been eating her flesh from the inside.

Lois underwent a medical procedure that cut away at the bacteria and dead flesh of her face. She was also subjected to Bioactive Glass procedure, a specific type of facial reconstruction that replaced the dead tissue and rebuilt her nose. As part of her recovery, she was required to undergo lung drainage, physiotherapy, as well as speech therapy.

Then one morning, Lois was horrified to learn that her disease came back a year after her surgeries.

“I just sneezed and blood started flowing out of my nose and I looked down at my hand and there was a lump of bone, which turned out to be my septum,” she recalled.

Forced to leave her job as an actress and move back into her parent’s house, Lois became suicidal.

With the help of a friend who enrolled her on to a voice masterclass at the Royal Academy of Dramatic Art (RADA) in London, Lois finally found hope in life.

After going through five procedures which reconstructed her nose, Lois is now on her way to recovery.

What is Necrotizing Fasciitis?

A serious bacterial infection which kills the body’s soft tissue and spreads quickly, necrotizing faciitis is commonly called flesh-eating infection. It is a rare disease caused by several types of bacteria.

According to the Centers for Disease Control and Prevention, healthy individuals have very low chances of getting necrotizing fasciitis.