When it comes to presentations in talent shows, it pays to do something that is out of the ordinary so you will catch the judges’ and the crowd’s attention. You might not win the show but could become a viral hit on social media, instead.

Take for example these four young ones who created a rather hilarious presentation for their school’s annual talent show. The four boys are studying as 5th graders at New Braunfels Christian Academy in New Braunfels, Texas.

Before their presentation, they went to the stage hiding behind a black theatrical curtain which was pulled back to reveal the four ‘wearing’ onesies and pacifiers. Of course, if you look closely, you will see that their legs aren’t really for real and were attached to their arms with strings but the effect was still cute and hilarious at the same time. 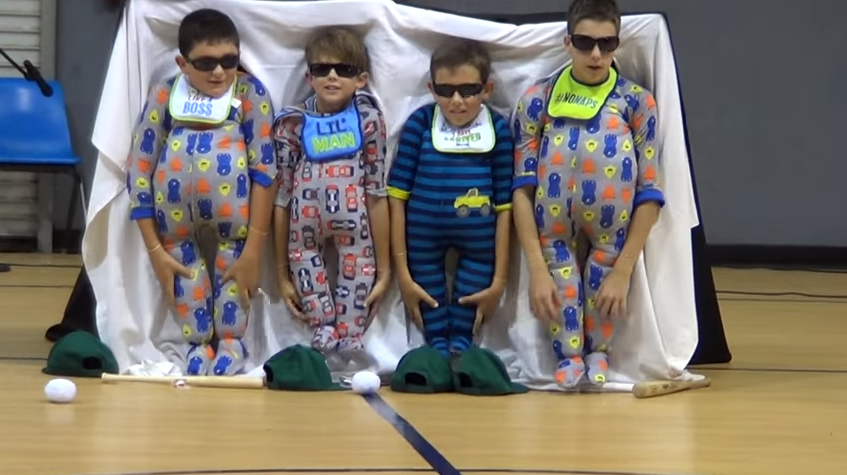 The boys’ delightful dance had the audience cracking up from start to finish, with the song medley taking you from modern hits like Taylor Swift’s “Shake It Off” which was actually quite perfect for their costumes to classic hits like the Village People’s “YMCA”.

They capped the performance with an adorable version of Justin Timberlake’s “Can’t Stop the Feeling” as the crowd cheered on.

A lot of netizens found the video quite hilarious but commented that they loved the second boy (from the left) best because he seems to be the one enjoying the performance most. Of course, it is highly likely that the others were amused but trying hard to keep themselves from laughing but this charming kid just stole the show.

What do you think of their performance? Cute and hilarious, definitely!