A lot of people look back at their high school days as some of the best days in their lives. Many found a lot of great friends in high school, friends that would become their buddies for life. But many teachers in this period also make a strong impact on students’ lives.

Do you remember your high school life and the teachers you’ve had then?

While many of us still hold great memories of our high school teachers, we rarely go back to the school just to thank them for what they have done in our lives. It is understandable, of course, but there are those who go the extra mile to do so.

Take for example a man named Fredy who took his high school teachers, all 65 of them, on an all-expense paid vacation!

According to a teacher, he was surprised when Fredy arrived at the school and introduced himself as an alumnus who graduated in 1993. The former student told the teachers that he’s taking everyone on an all-expense paid vacation to Europe but at first they laughed, thinking this was a prank. 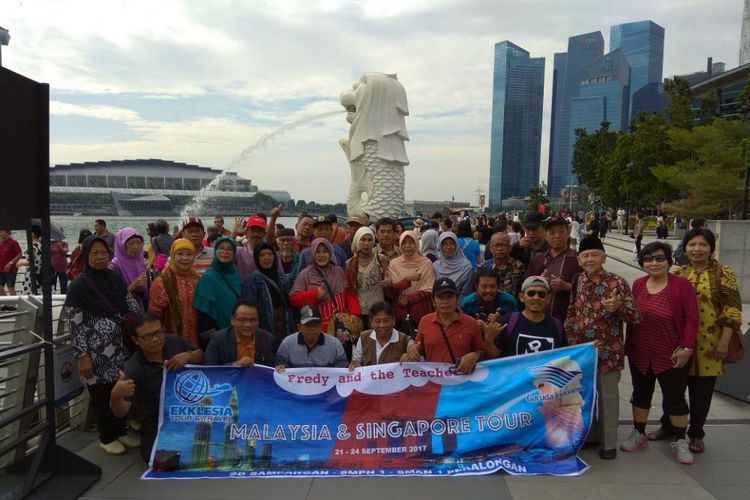 But Fredy is serious. He told the story of how he had fallen into a coma after meeting an accident. While in coma, he dreamed about all his former teachers visiting him at the hospital. After he recovered, he found great success in the fiber optic industry and was rich enough to pay his teachers back.

Realizing that he’s quite serious about his offer, his teachers accepted graciously but had one request: that the trip be done someplace closer to home because most of them are old. After all, it’s been 24 years since Fredy had graduated from high school.

The young man agreed, taking the teachers to Malaysia and Singapore instead. Not only did he provide them first class tickets and accommodations, he also paid for those who had to process their passports and visas.

The 65 teachers began their 5-day all-expense paid first-class trip to the two countries last September 19. The school’s principal joked, “Probably 100 years from now, we will not find another crazy ex-student like Fredy.”